PHOENIX - Arizona is holding its 2022 primary election for statewide and legislative candidates on Tuesday, August 2, followed by the general election on Tuesday, Nov. 8.

Learn how to register to vote, find election dates and deadlines, the candidates, polling station locations, voting by mail safety, volunteer to be a poll worker, what to bring to the polls, and how to track your early ballot's status.

What happens if my early ballot is returned late?

As mentioned above, all ballots are to be received before 7:00 p.m. on August 2. Those received late will not be counted, according to officials.

When do the polls open?

Polling stations will open at 6 a.m. and close at 7 p.m. on Election Day.

Where do I vote?

Early voting for the primary election began on July 6 when ballots were mailed to voters on the Permanent Early Voting List, voters who requested a ballot-by-mail and in-person early voting at county recorders' offices and other designated early voting locations.

Each county has different in-person early voting options. Visit AZSOS.gov/county-election-info to learn about the in-person options in your area.

Is voting by mail safe?

"Ballot by mail has been available in Arizona for over two decades. In the 2020 General Election, approximately 89% of ballots cast were early ballots. As the majority of Arizona voters already choose this method to vote, the infrastructure and security measures are well in place to ensure ballots are safe and secure," stated officials on AZCleanelections.gov.

How is Arizona securing the vote-by-mail process?

The Secretary of State's Office lists the following methods:

How can I register to vote?

According to the Secretary of State's Office website, the last day to request a ballot by mail for Independents and voters not on the Permanent Early Voting List is July 22

REGISTER TO VOTE IN ARIZONA

While the deadline has passed for Arizona residents to register to vote, there's still time for people to get a mail-in ballot for both the primary and general elections.

"Voters who wish to vote by mail but are registered as Independent or not on the Active Early Voting List are strongly encouraged to make their request as soon as possible," Arizona Secretary of State Katie Hobbs said. "We want to make sure everyone has enough time to make their voices heard."

Hobbs noted that there are other important items to remember about voting early, including:

"Voters also have the option of voting early in person. The counties will offer in-person early voting sites throughout the state, but the locations and hours of operation may vary," Hobbs said. "Voters should contact their county recorders with any questions they may have and make a plan to vote."

According to AZSOS.gov, "Your ballot-by-mail must be received by county election officials by 7:00 p.m. on Election Day. If you are going to mail back your ballot-by-mail for the General Election, we recommend you do so by November 1, 2022. For the August 2, 2022 Primary Election, we recommend putting your ballot in the mail by July 26, 2022 . Otherwise, you should take your ballot to any ballot drop-off location or voting location in your county by 7:00 p.m. on Election Day." 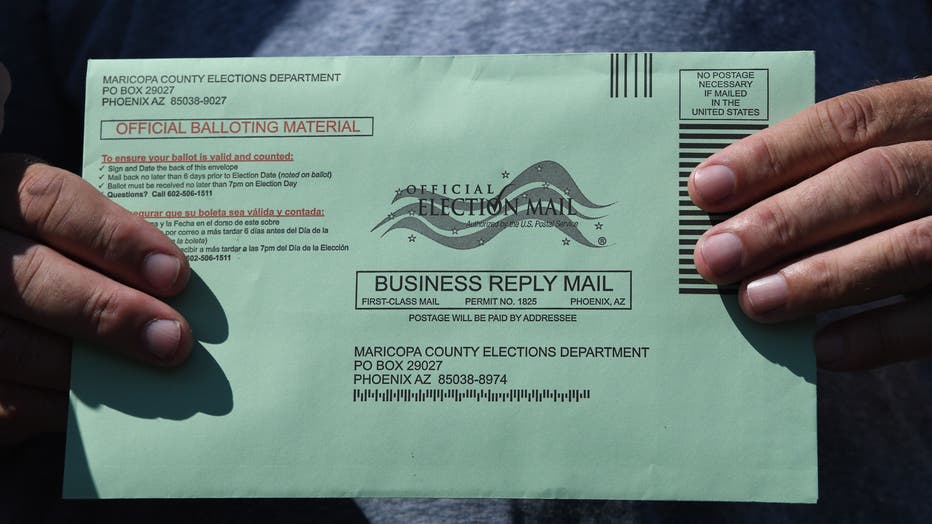 A voter displays their mail-in ballot envelope as they arrive to cast their ballot in the US presidential election at an early voting location in Phoenix, Arizona on October 16, 2020. (File photo by ROBYN BECK/AFP via Getty Images)

If I voted already, will my vote be counted?

Text the word "JOIN" to 628-683 or visit TextSignUp.Maricopa.Vote to subscribe to automatic updates on your ballot status.

For any Arizona county, you can check My.Arizona.Vote to track the status of your ballot and confirm that it was received and counted.

I lost or damaged my ballot-by-mail. How do I get a replacement? 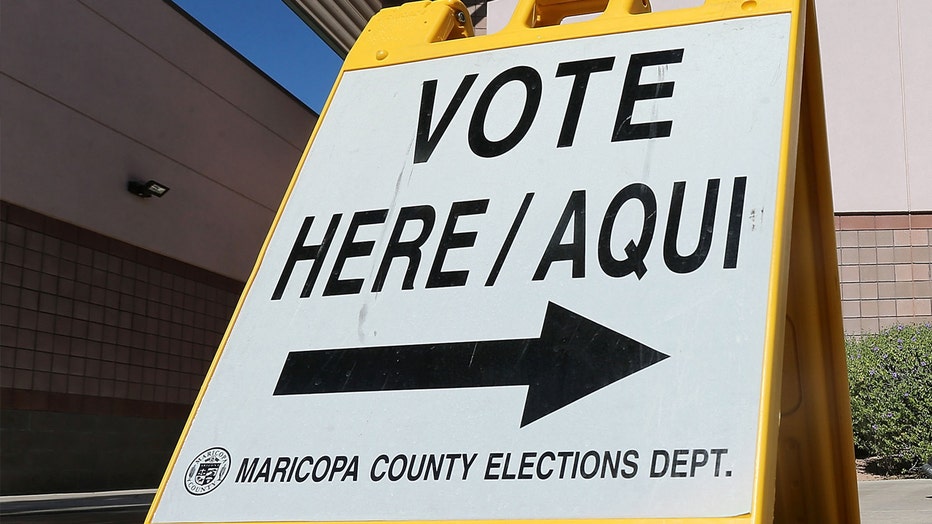 I'm voting in person. What do I need to bring to my polling place?

The address on your ID must match your voter registration address. If not, you must provide a utility bill in your name; bank or credit union statement (dated within 90 days of the election); Arizona vehicle registration; Indian census card; property tax statement for your residence; a piece of mail in your name marked 'Official Election Material;" Arizona vehicle insurance card; recorder's certificate; U.S. federal, state, or local government-issued ID, issued with printed name and address; or a Tribal enrollment card.

I'm serving in the military overseas or reside overseas. What are my options for receiving and returning a ballot?

For military and overseas personnel to vote in the election, head to https://my.arizona.vote/UOCAVA2/default.aspx. You can request to register to vote and/or request a ballot-by-mail or upload a voted ballot. If you're unable to use the website for the ballot upload, you can fax the completed ballot to 602-364-2087 by the 7 p.m. (Arizona time) deadline on Election Day.

TAKE THE WHAT ID DO I NEED TO VOTE QUIZ

How many people have voted already in the primaries?

With just a week to go before the primaries in Arizona, Maricopa County elections officials say they have received and verified hundreds of thousands of early ballots already. FOX 10's Nicole Garcia reports.

Turnout in Maricopa County is expected to be about 30% to 40% of voters. Workers anticipate processing about 850,000 ballots.

"We’ve received back and verified a little over 400,000, so as far as the vote we’re going to get in Maricopa County, we expect we already received and processed about half of it," said Maricopa County Recorder Stephen Richer.

Richer said so far, the breakout of returns are about evenly split between Republican and Democratic ballots.

Who are the candidates in Arizona?

For Arizona state senator and representative candidates, a full list is available at the Arizona Secretary of State's apps.arizona.vote website.

Maricopa County is still looking to hire election workers, offering big bonuses to ensure there is enough staffing for the August primary and November general elections.

On AZSOS.gov, officials stated, "Poll workers are an essential part of democracy and the election process. Counties rely on poll workers to work on election day, throughout the early voting period, and, in some cases, after election day. Each county has different needs, from long-term positions at their tabulation center to working at voting locations on Election Day. No matter the role, poll workers are vital to the success of elections in Arizona."

The Secretary of State's Office says poll worker hiring is done at the county's discretion and contacting your county does not guarantee a position.

Apache County: Email mclark@co.apache.az.us to state your interest in working the upcoming election with your name address, phone number, and party registration.

Cochise County: Hiring is finalized for 2022.

Coconino County: "To be an Election Board Worker in Coconino County, you must be a registered voter, attend the required training and meetings, and serve voters at polling locations impartially, safely, and efficiently. Elections Board Workers may earn up to $275 depending on the role they serve on Election Day. Please join our team, we are committed to supporting you in serving our county voters." Email wkasprzyk@coconino.az.gov or head to https://www.coconino.az.gov/196/Become-an-Election-Board-Worker.

Gila County: Email eemiller@gilacountyaz.gov to state your interest in working the upcoming election with your name address, phone number, and party registration.

Greenlee County: Visit https://greenlee.az.gov/departments/elections to fill out the board worker application form.

Pima County: Hiring is finalized for 2022.

Pinal County: See https://www.pinalcountyaz.gov/ELECTIONS/Pages/PollWorkers.aspx for the application process. Qualified high school students can be poll workers by using the same link. A parental/guardian slip must be provided.

Yuma County: Download and complete the election worker application at https://www.yumacountyaz.gov/government/voter-election-services/election-workers, then return it to elections@yumacountyaz.gov. Qualified high school students can be poll workers. The same application and email address can be used to submit the form.

More on the 2022 Midterm Elections 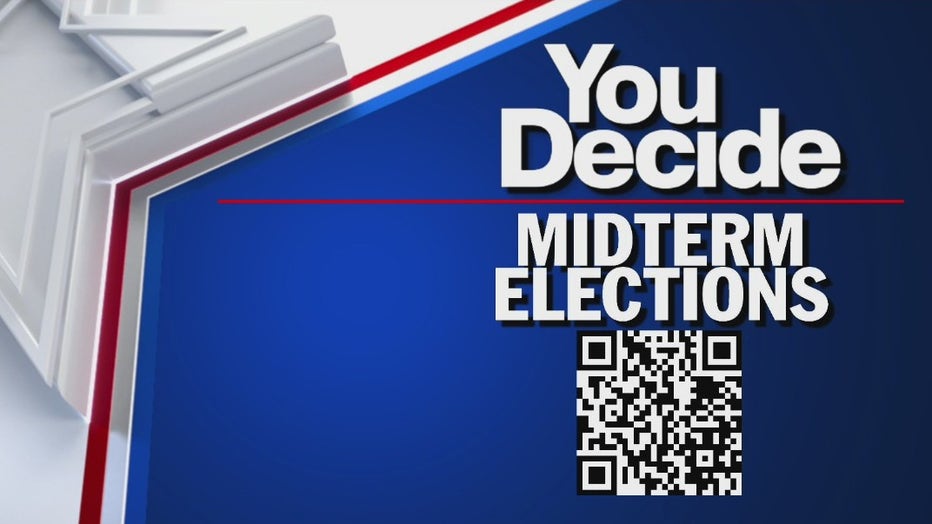