An American Airlines pilot was left perplexed after seeing a cylindrical object flying overhead during a flight from Ohio to Arizona on February 21.

PHOENIX - An American Airlines pilot saw something strange as he was flying toward Sky Harbor Airport on Feb. 21 and a Phoenix-area UFO expert breaks down what she thinks it could have been.

Flight 2292 left Cincinnati at 11:22 a.m. and arrived in Phoenix at 1:42 p.m., but somewhere in the skies over New Mexico, the pilot saw something strange and wanted to know what it was.

His encounter was caught on recorded audio by the blogger, Deep Blue Horizon. "Do you guys have any targets up here? we had something go right over the top of us," the pilot says.

He radioed in at 1 p.m. Central Time reporting an object flying right on top of them. "Hate to say it, but it looked like a long cylindrical object going really fast like a cruise missile. It went right over the top of us," the pilot explains.

Dr. Lynne Kitei with The Phoenix Lights Network says, "The fact that it was a pilot and they were so excited about it tells you something. Because these are trained observers."

She knows the thing or two about UFOs as she’s one of the most outspoken voices on the Phoenix Lights Phenomenon.

She snapped pictures of cylindrical objects in the East Valley herself 20 years ago, perhaps similar to what the pilot saw.

"These pictures sound similar to the one the pilot was talking about. I still don’t know what they are. Most things can be explained, but not everything," Kitei says.

An American Airlines statement confirms the audio recording is from its flight 2292 on Feb. 21. But as for now, what it was and what it was doing up there is anyone’s guess. 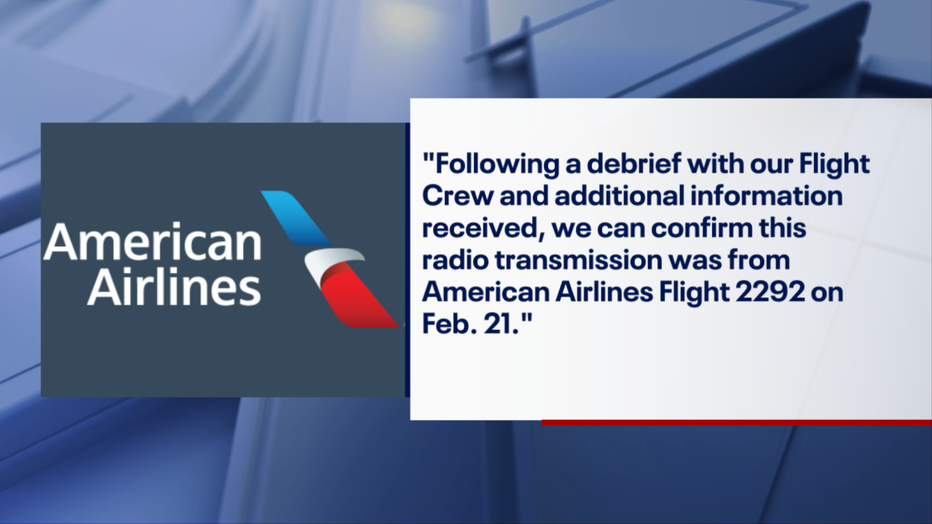 The FBI released a statement about the reported incident, saying, "The FBI is aware of the reported incident. While our policy is to neither confirm nor deny investigations, the FBI works continuously with our federal, state, local, and tribal partners to share intelligence and protect the public. Anyone who is aware of suspicious or criminal activity should contact their local law enforcement agency or the FBI."