MOSCOW - In the wake of WNBA star Brittney Griner’s detention in Russia, U.S. Reps. Byron Donalds, R-Fla., and Burgess Owens, R-Utah, have called on the Biden administration to send a message to Russian President Vladimir Putin, letting him know Americans will not be held as political pawns in the midst of the country’s invasion of Ukraine.

Donalds and Burgess, in a letter to President Biden and Secretary of State Antony Blinken – and exclusively obtained by Fox News Digital – acknowledged Griner may have violated Russian law but wrote that her detention since sometime in February was concerning given the deteriorating geopolitical climate.

"Today, we write to you regarding the unfortunate case of Women's National Basketball Association (W.N.B.A) star Center Brittney Griner who remains in a Russian prison for violating the country's illegal substance laws," the Congress members wrote. "Every American – regardless of their race, gender, or socioeconomic status – must adhere to the rules of every sovereign nation. While we are not here to call balls and strikes on Russian law, we are very concerned about Mrs. Griner’s detention under the current and rapidly deteriorating circumstances in Russia and Eastern Europe.

‘Slap in the face’

"While Mrs. Griner made a grave mistake, we condemn the Russian government’s utilization of her as a pawn to further their ruthless and sick goal of fulfilling the reincarnation of the Union of Soviet Socialist Republics (USSR). We call upon your administration to look Putin in the eyes and send a clear message to the Kremlin that America will not tolerate Putin using Americans as his pawn during this treacherous and bleak moment in world history. Putin's unprovoked and murderous attack on Ukraine is a slap in the face to the Western world, and it is time that the United States stands up to this bully. Mrs. Griner has proudly represented our country here at home and on the world stage, becoming one of the few W.N.B.A players to win a college championship, W.N.B.A and Euroleague titles, and an Olympic gold medal — and we urge the safe return of Mrs. Griner and any other Americans detained in Putin’s hellhole of a country."

The WNBA star was arrested last month after authorities said a search of her luggage revealed vape cartridges containing oil derived from cannabis. Griner could face up to a decade in prison if she’s convicted.

"In closing, it is more apparent than ever that actions have consequences, but no American should fall hostage to a heinous and deranged dictator," they added. "As Ukraine continues to fight for its freedom valiantly, the United States of America must send a message to the world that freedom must always prevail and that no American will be left behind. We pray for Ukraine and the safe return of Brittney Griner."

Donalds serves Florida’s 19th Congressional District and sits on the House Budget Committee, Oversight and Reform Committee and Small Business Committee. He won his congressional election in 2020 with 61.2% of the vote. 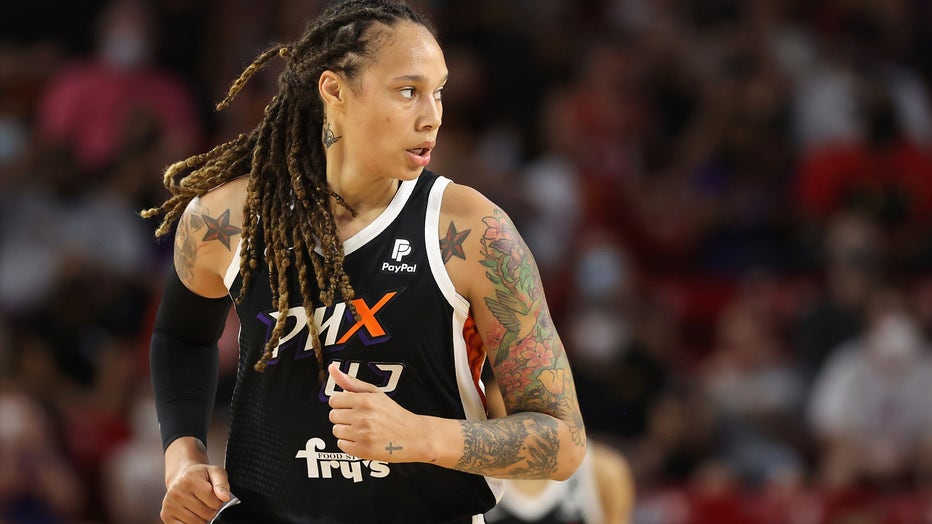 TEMPE, ARIZONA - OCTOBER 03: Brittney Griner #42 of the Phoenix Mercury during Game Three of the 2021 WNBA semifinals at Desert Financial Arena on October 03, 2021 in Tempe, Arizona. The Mercury defeated the Aces 87-60. (Photo by Christian Petersen/G

Griner is one of the biggest basketball stars in either the men’s or women’s game. She’s a seven-time WNBA All-Star and one-time WNBA champion who is set to play her 10th season for the Phoenix Mercury this summer.

She’s spent her last seven winters in Russia where she earns more than $1 million per season. The figure is more than quadruple her WNBA salary. She last played for her Russian team, UMMC Ekaterinburg, on Jan. 29 before the league took a two-week break in early February for the FIBA World Cup qualifying tournaments.