Phoenix Police cold case detectives are using genetic code to solve cold cases, ultimately reuniting John or Jane Does with their loved ones thanks to forensic genealogy.

PHOENIX - They are the nameless - people who have been dead for decades - and the unidentified. Some of them are also victims of violent crimes.

Nowadays, Detectives with the Phoenix police continue to use genetic code to solve cold cases, and ultimately reunite "John Does" or "Jane Does" with their loved ones, using forensic genealogy.

There is a special focus behind Stephen Missal’s process. It’s not just a sketch that he makes. Rather, it’s a facial reconstruction of someone Missal has never met.

Each feature, each mark - what makes them who they are - is a piece of the map to find their identity, and bring them home.

"I wanna capture a likeness that would be if a family member or an acquaintance saw, it would trigger the recognition," said Missal, a forensic reconstruction artist.

Missal draws faces of the unidentified for the Maricopa County medical examiner.

"Some of the images are quite frankly disturbing," said Missal. "I'm honoring them. I'm honoring their family and then, sometimes their end bothers me."

The lead investigator on this case is Detective Stuart Somershoe with Phoenix Police.

"Every holiday, every birthday, every anniversary of the disappearance, not knowing," said Det. Somershoe.

Plastered across walls are questions that echo for dozens of families not knowing what happened to missing loved ones for years, sometimes decades.

According to the National Missing and Unidentified Persons System, Arizona has the second-highest number of unidentified people in the United States.

Det. Somershoe says the close proximity to the border is one factor, as people cross into the desert and die. The arid climate turns remains into skeletons quickly, leaving their identities unknown.

"The one thing you get when you're born is you get your name, that's the one thing you should be able to keep when you die, and these people were denied that," said Det. Somershoe. "They're just a John or a Jane Doe." 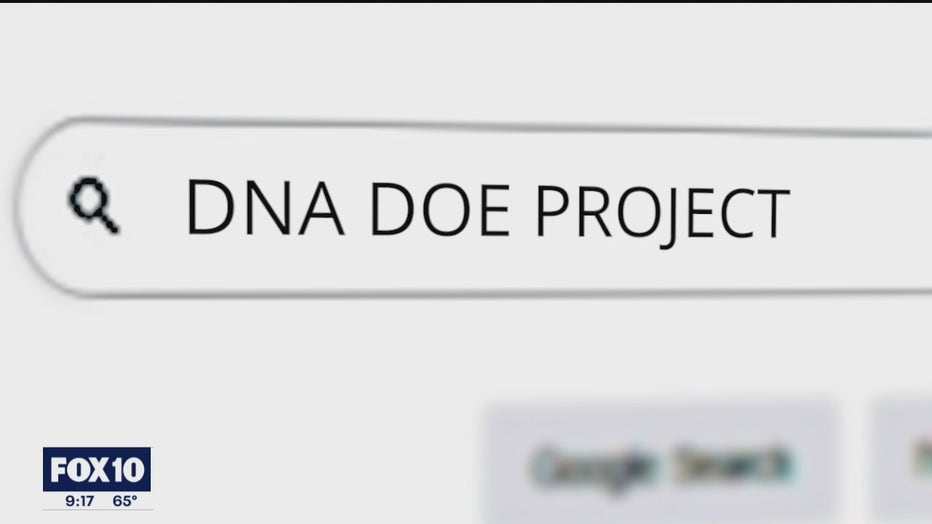 Organization steps in to help

The DNA Doe Project is a non-profit organization fueled by 60 genealogists volunteering to help law enforcement identify these John Does and Jane Does. It works by uploading the unidentified person's DNA profile is uploaded to two public databases.

"They're mapping out a family tree in hopes of finding their Jane Doe," said Det. Somershoe.

This brings us to a drawing of a woman known to Det. Somershoe as "Broadway Street Jane Doe."

The woman is described as Hispanic, 40 to 50 years old, 5’4", with short brown hair and brown eyes. She was hit by a car in Phoenix and left to die near S. 15th Street and E. Broadway on Nov. 21, 2004. At the time, investigators found scribbling on her palm.

According to officials with the DNA Doe Project, the victim's DNA is traced back to Calvillo, a small town in Mexico’s Aguascalientes state, where her parents are believed to be from.

However, forensic genealogist Cairenn Binder says the Jane Doe could be found in multiple branches of a family tree.

"That's the hard part about solving her case, is not only does she have limited matches because she's born in a foreign country, most likely, but also it's challenging cause of the various connections between her family tree and her match's family trees," said Binder, who is with the DNA Doe Project.

"We're trying to reach out to people who are from there who might know this lady, a missing friend or a missing family member, and have someone contact us," said Det. Somershoe.

Investigators working on other cases

Officials with the Phoenix Police Department and the DNA Doe Project are working on another active case together.

On Feb. 4, 1997, a woman is found dead and partially burned in an abandoned blue Honda Accord near N. 24th Street and E. Monroe Street. This case is significant for Det. Somershoe.

"I was a young patrol officer," said Det. Somershoe. "I responded to that scene, and serendipity or whatever, I inherited that case when I became a detective, and so we've been working to figure out who she is."

That was the first time Det. Somershoe saw a dead body while on duty. That woman is known as "Monique" because the name was written on a purse that was found by her side. "Monique" is described as African American, 5’3" tall, weighing 100 pounds, and possibly a transient seen in the area back then.

Pending cases are those undergoing extraction or DNA sequencing. There have reportedly been delays due to the ongoing COVID-19 pandemic.

"We have a lot of pending cases right now," said Binder. "Some of the labs have been understaffed or closed down during the pandemic at various times."

The success of identification is motivation. In April 2004, Phoenix Police officers found the remains of a middle-aged woman in a rolled-up carpet. The case went cold for nearly 16 years until the DNA Doe Project used the victim's DNA to find a link between families.

Det. Somershoe says the next call he made gave him chills.

"With Ginger Bibb's family, when I reached out to her father, who was in his 80s, he's like, ‘I've been waiting for this phone call,’" Det. Somershoe recalls.

The identification of Ginger Lynn Bibb would be confirmed after her dad submitted his DNA for testing.

"I think this is as major a development as DNA was originally when I started," said Det. Somershoe. "That solved a lot of cases on its own, but now, we're going further."

"If I get an ID, I tell my wife, we go high five," said Missal. "I’m happy, and then I've actually met a couple of the families, and that's very emotionally moving, so that's reward enough for me."

Anyone with information on the hit-and-run cold case that was featured in this report can call Silent Witness at 480-WITNESS. Calls are anonymous, and people can earn a cash reward.