FBI: Bank robberies on the rise across the Valley

FBI officials say they have linked a number of bank robberies to three suspects, and two of them are still on the run. FOX 10's Nicole Garcia reports.

PHOENIX - Federal investigators say they’ve seen an increase in the number of bank robberies in the past year.

Of the three suspects, one of them was arrested last week, and the search is ongoing for two other suspects: one nicknamed the "Piggy Bank Bandit," and the other the "Back Again Bandit." 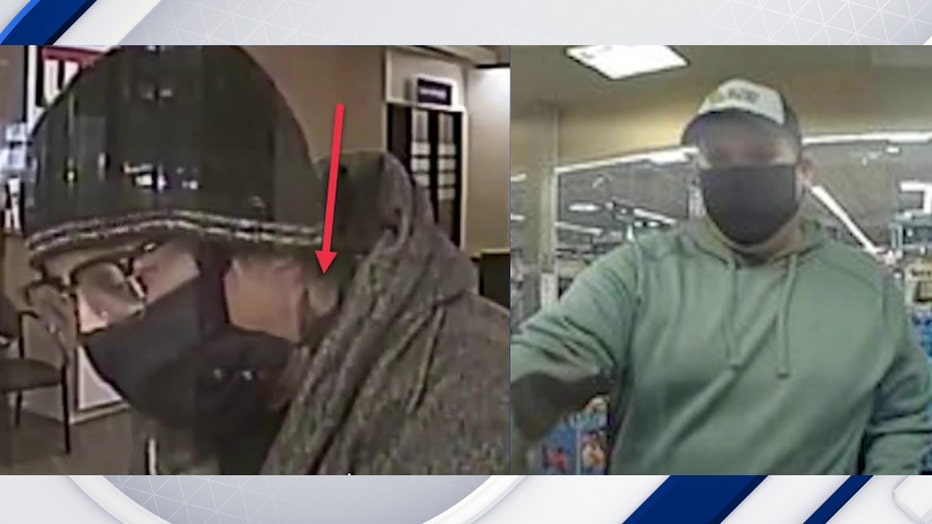 The suspect was nicknamed the "Piggy Bank Bandit," after he got away with a bagful of rolled coins during his first robbery.

The FBI is also looking for a serial robbery suspect who has struck five times so far.

"This bank robber seems to be hitting the same exact bank, over and over," said Special Agent Horan.

Officials say the "Back Again Bandit" hit a US Bank location inside a Tempe Fry’s grocery store twice, and another US Bank inside a Phoenix Safeway grocery store three times.

Investigators say suspects find it easier to go unnoticed as a result of mask use requirements that were put in place because of the ongoing COVID-19 pandemic.

While there are no reported injuries connected to the recent spate of bank robberies, the wanted suspects are considered armed and dangerous.

"It’s a crime of desperation," said Special Agent Horan. "We don’t know the backstories of these people, or what state of mind they’re in when they’re robbing these banks."

Suspect in Tucson stabbing death of woman arrested in Globe

Tucson police said 34-year-old Bruce Fairbanks Spring was taken into custody on the afternoon of March 8 and will be extradited to Pima County.

Police say officers were at a home in the area with volunteers to help clean up the yard when a woman got out of the home, fired a gun at officers, went back inside, and then came out a second time and pointed the gun at officers.

Family of Glendale man killed in unprovoked attack speaks out

74-year-old Juanito Falcon died when he was attacked for no apparent reason, according to Phoenix Police. Now, members of his family say they are still in mourning, but they are determined to raise awareness on attacks like these, hoping it will never happen again.