A former Mesa Police officer reportedly was seen dragging a brown dog behind his truck while off duty in April. He resigned from his job and is facing animal cruelty charges.

MESA, Ariz. - The Apache Junction Police Department says former Mesa Police officer Spencer Allen dragged his own dog through the road with his pickup truck, took him to the vet and claimed he wasn't his dog.

For seven years, Allen worked as an officer for the Mesa Police Department. He resigned in May of 2021 just weeks after being arrested by Apache Junction Police officers.

He's a delivery driver for Bluebell Creameries and he says that morning, as he drove east on 37th Avenue near Colt Road, he witnessed a pickup truck going the opposite direction, dragging a medium-sized brown dog behind it.

"What sticks out in my mind is the chain wrapped around the dog's neck and the dog was trying to stop, sitting down with the paws right in front of him," Read said.

Read quickly made a U-turn and honked at the driver, even waving at him. The driver, identified as Allen, who was off-duty, reportedly never stopped.

"Once he hit Baseline, taking off the way that he did, zero to 50 in about three seconds," Read remembered.

Read says another driver finally got Allen to pull over near Idaho Road and Baseline Avenue, half a mile away from where Read first spotted the dog in danger.

The police report says Allen then unchained the dog, picked it up by the scruff of the neck and threw it in the back seat. 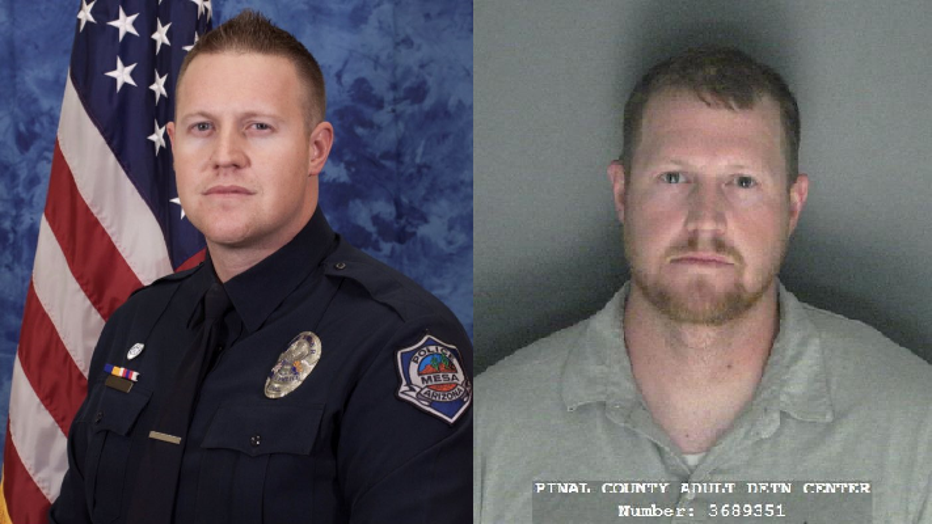 "He stated that he had found the dog on the side of the road, he was being a good samaritan, but that wasn't the case," Sheahan said.

The staff told Allen the dog needed medical attention right away, referring him to a vet in Mesa. When Allen arrived at the vet, the police report says he again told staff the dog should be euthanized, even signing a form stating it was a stray.

"The dog had lost a lot of skin across all of its body. I believe it also had a puncture to the lung," Sheahan said.

The Arizona Humane Society performed surgery but the dog had to be euthanized days later.

Read says he told police what he witnessed. "I was sick to my stomach because I had just witnessed a dog being dragged behind a truck and it's just one of those things that it infuriates you, that someone would actually do that," he said.

In Allen's interview with Apache Junction Police, investigators say he initially denied owning the dog, but police told him they had surveillance video and witnesses.

Allen later admitted to owning the dog named Cosmo for seven years, according to the report. "I had him on a leash and he's never hopped out in the seven years I've had him," Allen said, adding that he panicked and felt bad.

"But I was like, ‘He needs to be put down either way,’ so that's what I was hoping for. I should've just footed the bill,'" Allen said.

Mesa Police began a professional standards review on Allen on April 15, but he sent a resignation letter on May 4, ultimately ending the review.

Allen was charged on May 6 after sending in his resignation letter. He is accused of animal cruelty, falsifying information to police and forgery.

He is currently out of jail on the conditions of his release.