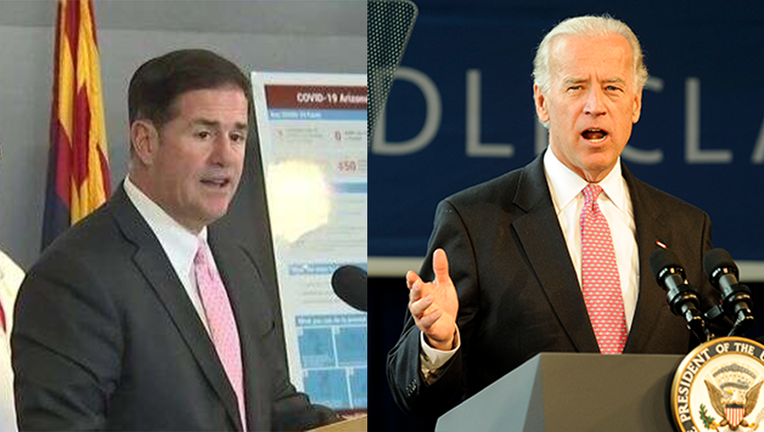 PHOENIX - Arizona Gov. Doug Ducey took to Twitter after presumptive Democratic presidential nominee Joe Biden spoke out against him and President Trump, criticizing how the state has handled the pandemic.

President Donald Trump is set to host Arizona Gov. Doug Ducey at the White House on August 5, as he points to the state as a model for the nation for addressing “embers” of the coronavirus.

The former vice president criticized the lack of a statewide mask mandate in Arizona, citing an infection rate of nearly 20%, extensive delays in getting test results, and the state's high hospitalization rate - which he says is the fifth-highest in the country.

"The truth is that President Trump could have acted months ago to curb this pandemic—it's obvious he still hasn’t learned his lesson," Biden wrote. "He continues to ignore the warnings of health experts and we're all paying the price."

Governor Ducey tweeted a few hours later, providing a different set of statistics to show the state's progress in controlling the spread of the virus, claiming that Arizona has more than 300 COVID-19 testing sites, a 9% to 11% positive rate in tests, and how the virus's replication rate is .84 - the lowest in the United States.

" 'Come on man!' Get out of your basement, Joe, and get the facts on Arizona," Ducey tweeted.

As of Aug. 7, the Arizona Dept. of Health reports a 12.5% total positive test rate. The percentage represents "the number of people with a positive test result out of all people with COVID-19 testing completed in AZ," according to the DHS website.

Less people are being tested as well - during the virus's peak in early July, nearly 20,000 people were being tested daily. That number has dropped to an estimated 10,000 tests per day in the state.

The governor also suggested Biden was "rooting for the virus" for political gain.

"The last thing we need is another politician rooting for the virus because it helps them politically. We've got enough of that," Ducey wrote. "AZ has more work to do, but we are on the right track thanks to the actions and responsibility of our people."

The testing site is located near 43rd Avenue and Bethany Home Road and is open by appointment only, beginning Friday, August 7.

Presumptive Democratic presidential nominee Joe Biden said that while he won’t tear down President Trump’s much-touted wall along the United States’ southern border with Mexico, he also won’t continue construction of the barrier if he’s elected president in November.