The three are accused of robbing six businesses in the Valley.

PHOENIX - Four men have been arrested in connection to a string of armed robberies in Glendale and Phoenix.

Noel Aragon, 22, Dakotah Jones, 20, and Justin Krause, 20, were arrested, the FBI said on Feb. 18. Of the three, Jones turned himself in on Feb. 16, and police say he admitted to being involved in four of the six armed robbery incidents, and even claimed he used a pellet gun on victims.

Court documents reveal Jones identified Aragon as the other armed suspect, and said Krause was the get-away driver. Police also say the crew scouted businesses for cameras before committing the crimes.

The fourth suspect, 25-year-old Ryan Riesgo, was the last to be arrested on Thursday. Court documents alleged that Riesgo was a scout for two of the robberies and would check the shops for employees, customers and cameras.

The men are suspected of robbing six businesses in late November and early December. Five were smoke shops, and one was a Cold Stone Creamery.

The FBI nicknamed the group the "Jeepers Bandits" because one of them resembles Shaggy from "Scooby-Doo."

The suspects reportedly posed as customers, brandished guns, and demanded money during the robberies.

According to police, the bandit's MO is to hold store workers at gunpoint, demand case while one of them sometimes stands outside as a lookout.

According to officials, Phoenix and Glendale Police, along with the FBI, investigated for nearly three months. 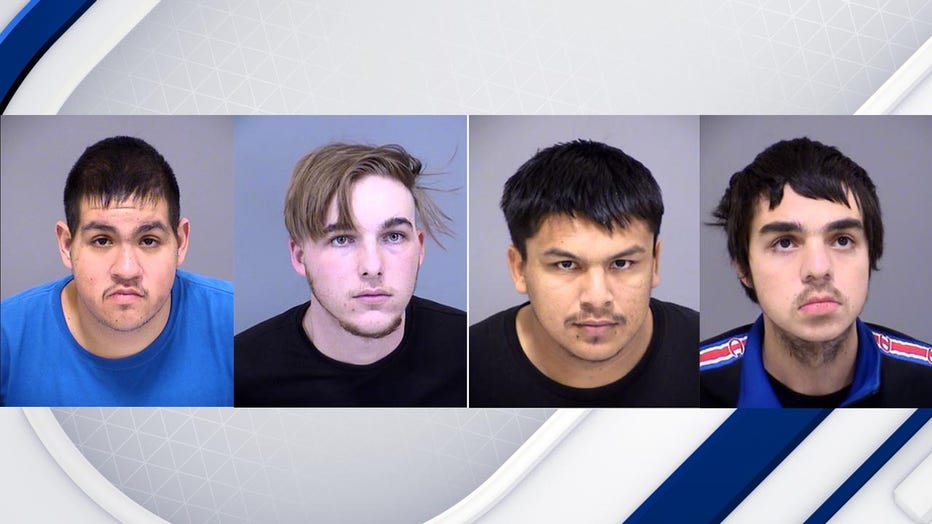 One shop owner, who did not want to be identified, said his employee was held at gunpoint and robbed. The owner reacted to news of the arrests on Feb. 18.

"I feel good, but I don't know why they're doing that actually," said the owner.

The owner said the bandit allegedly robbed the employee of two cartons of cigarettes and nearly $700 before running away. The owner says it's tough enough to make a living during the ongoing COVID-19 pandemic.

"I'm working almost seven days a week, and somebody come over here -- do you know how much money I make with a cigarette? It's like $5 for the carton," said the owner.

FBI looking for 4 suspects in string of armed robberies in Phoenix, Glendale