PHOENIX - The search for a Phoenix man who went missing on New Year's Eve has ended on a tragic note.

Benjamin Anderson, 41, was last seen at his home the morning of Dec. 31, according to a missing persons flyer shared on social media. His car was found burned early Saturday morning near Interstate 17 and Dunlap. The burnt car was found by Anderson's friends.

Sgt. Calbert Gillett with the Maricopa County Sheriff's Office confirmed on Jan. 3 that his body was found the same day he went missing, and a homicide investigation is underway.

"On Friday, December 31st, 2021, MCSO responded to the location of Table Mesa Road, west of I-17, for a body found in the desert. The MCSO Homicide Unit assumed the investigation, and today the identity of the decedent was identified as 41-year-old Benjamin Anderson," Gillett said in a Jan. 3 news release.

Anderson was previously reported as a missing person to the Phoenix Police Department.

Family, friends of missing Arizona man still searching for answers after his body was found in the desert

With the search for 41-year-old Benjamin Anderson having ended on a tragic note, friends say they are still searching for answers over his disappearance and ultimate death. FOX 10's Nicole Garcia reports.

A friend of Anderson recounted the search efforts.

"We started New Year's Eve looking for him," said a friend of Anderson, identified only as ‘Aimee.’ "Searching, speaking to Lexus, trying to get them to tell us where the car was."

Friends say they hit roadblocks when asking the luxury carmaker and Phoenix Police to use the GPS tracking ability on Anderson's vehicle to locate it.'

While Aimee was among the group of friends that eventually received the location of Anderson's Lexus, it was too late. Anderson's body would eventually be found 30 miles north of where the burnt car was found.

Friends and family members say they are baffled. 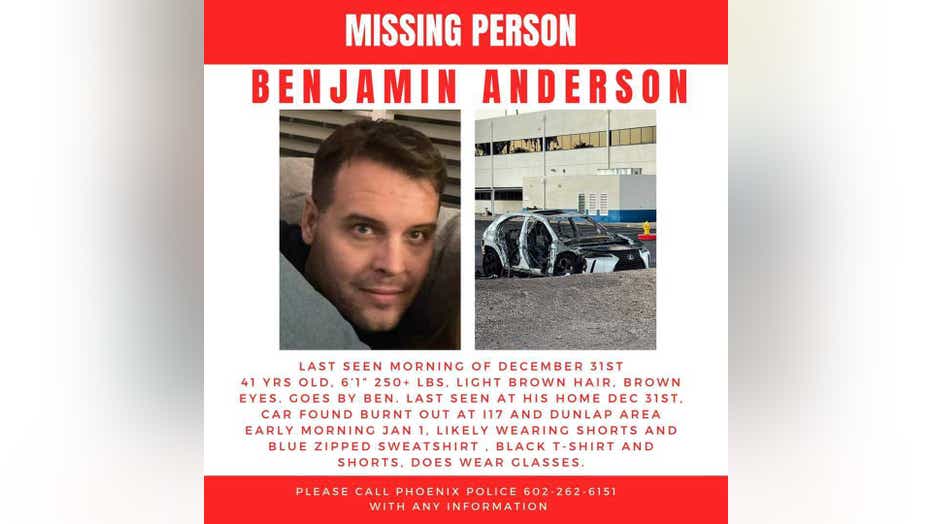