Mesa Police are asking for the public's help in finding a suspected burglar. FOX 10's Justin Lum has the latest.

MESA, Ariz. - Police are asking for the public's help to identify a man accused of burglarizing multiple cars and homes in a Mesa neighborhood over the past three months.

Officials say the crimes happened between the areas of Southern and University Drive and Sossaman and Ellsworth Road.

In total, 18 burglaries have been reported, with 6 of them being residential and the other 12 being vehicular.

The suspect has been described as a 5'10" to 6' white man in his 20s with a red or brown beard. He reportedly has distinctive tattoos on his neck and left hand, and has been seen fleeing on a bicycle.

Anyone with information is asked to contact the Mesa Police Department at 480-644-2211 or Silent Witness at 480-WITNESS. 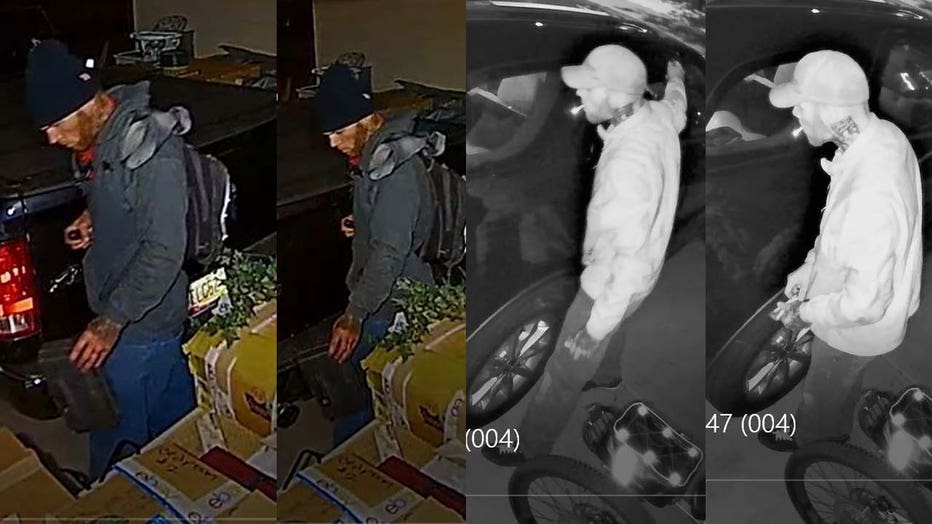 On Dec. 7 at around 1:30 a.m. William Pollard's security camera caught a man creeping on his property. Video shows him peep around the pickup truck with a flashlight and head back toward the shed.

Pollard came out of his home armed with a gun. He says he chose not to shoot as his wife called 911.

The suspect ran out of the Las Palmas 55+ community near Main Street and Power Road in Mesa.

The homeowner says he stole a collectible knife and his wallet.

"He went to Walgreens and bought gift cards with two of my cards, and he was up to about $2,000 worth of…money he stole from me at Walgreens," Pollard said.

Pollard had to cancel his cards and get a new ID to clean up the mess. Police say he's one of many victims burglarized over the past three months.

"Violated in the fact that I have what I have, and somebody came to my environment and took what I have, because they don't have it," he said.

It took two weeks for him to shake off the paranoia.

"There are some elderly people in this community, and I don't want them to go through what I went through," said Pollard.