The National Weather Service says that Wednesday's SpaceX satellite launch is the likely cause for the phenomenon, but many people who saw it aren't so sure. FOX 10's Brian Webb reports.

PHOENIX - FOX 10 viewers across Arizona reported seeing a trail of lights in the sky on the night of May 5.

Some viewers say at least 100 lights were seen moving across the sky in a single file line, with others claiming to have seen them moving from the west to the north.

The sightings were reported in locations like Queen Creek, Surprise, Lake Pleasant and Duncan, Arizona at around 9 p.m. on Wednesday.

SpaceX's Starlink satellites have been noted as being the source of similar lights in the past. The National Weather Service in Seattle says that Wednesday's Starlink launch from Kennedy Space Center in Florida is the likely cause for the phenomenon. 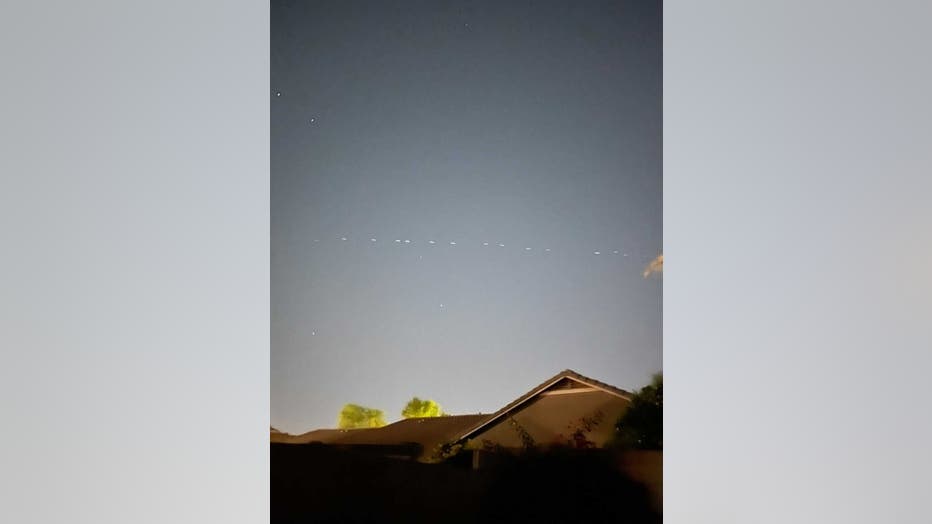 However, many people who saw it aren't so sure.

"They were all just moving and fast," said witness Jesse Farmer. "And there were no blinking lights or anything like that."

Farmer shot video of it over south Phoenix during the early morning hours, but his friends didn't believe him.

"He laughed about it and said maybe you need to get some sleep," Farmer said. "I said, ‘Trust me bro, I got video.’ "

A family in Surprise saw it too. 4-year-old Addie Muniz spotted the lights while jumping on a trampoline Wednesday night.

"I saw something like…a big light in the sky, like a bunch of little things and tiny, like lightbulbs," Addie said.

"It was pretty wild," said witnesses Sheena and Larry Muniz. "I don’t know if you saw the footage or the audio, but it was pretty [stunning]."

As for the reports of it being a group of satellites? Witnesses say there's no way.

"Yeah but I don’t know," Sheena and Larry said. "This was pretty strange."

FOX 10 has reached out to Space X for an explanation or comment, but have not heard back.

A similar event was observed in April 2020, when people saw multiple lights moving across the sky from the southwest to the northeast.