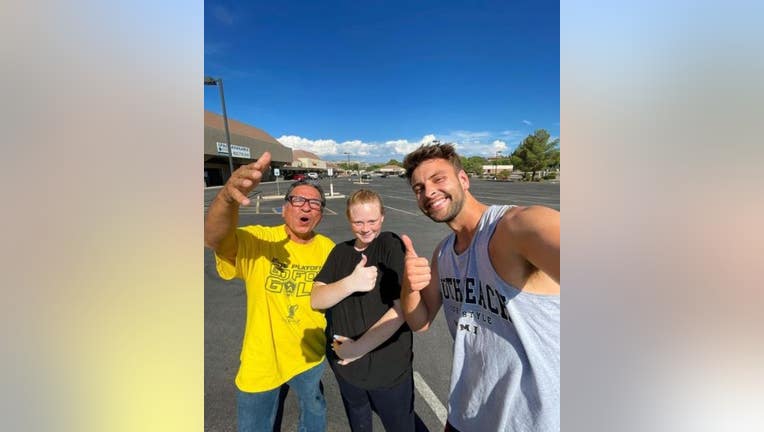 YAVAPAI COUNTY, Ariz. - A social media influencer spreading love and generosity has captured the hearts of people across the nation, including in Arizona.

He's taking the internet by storm one donation at a time and this time, he came to Arizona's Yavapai County to spread joy – and money.

Jimmy Darts, and a friend he made along the way on his journey, stopped in Camp Verde to give a stranger $500 for being honest after being asked if she dropped the money.

"Yeah so basically I've been doing this for the last few months on the internet, where I wake up every morning, I raise a bunch of money and then my followers tell me what to do with it," Darts explained.

Aurora Evans Flick from Camp Verde was getting off of work when she was approached with the question, "Do you know if this is yours?"

"Are you sure? I want to make sure it goes to the right person," Darts replied.

"No, I don't have that much money," Evans Flick said.

"The truth is, it's my money and I'm seeing the first person to be honest and I want to gift it to you," Darts said, adding he wanted to reward honesty because "a lot of people would lie."

Evans Flick said, "He was in Camp Verde, in the smallest town and I'm very grateful for it. We need a new car, so I'm going to save that for a new car …"

Darts ended up in Arizona after he met his friend Jose Molina and their video went viral.

"He started freaking out, crying basically. That day at work his boss had given everyone $20 except for him. He's from El Salvador and he's been working in the states sending them money," Darts explained.

Darts' followers were touched so much that Molina joined him on a road trip, bringing joy to others the same way he was blessed.

"I was down and my faith came up knowing that God would surprise me. I just did a new one and for me being with Jimmy, his friendship, his personality and all the love from everyone who has donated with their words, because it’s valued more than money," Molina said.

Click here to donate to Darts to help him continue spreading the joy.

What's next for the Camp Verde woman?

What will Evans Flick do to pay it forward?

She's asking for the public to donate to a GoFundMe for the unexpected passing of a loved one.