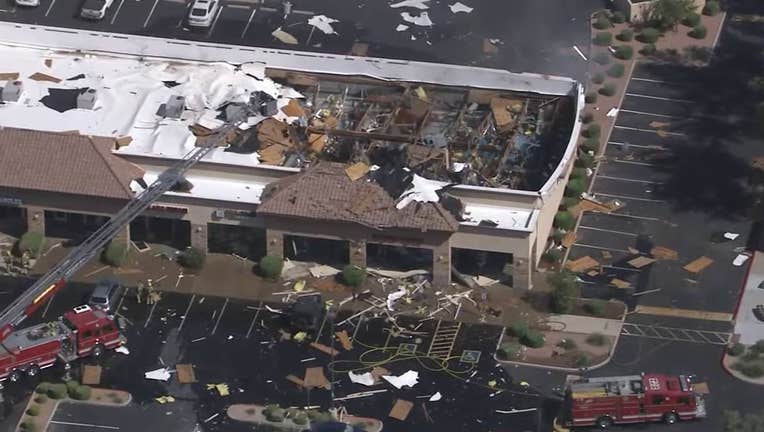 CHANDLER, Ariz. - Officials with Southwest Gas have released some findings from an initial investigation surrounding an explosion in Chandler late last month.

Three of the four men who suffered serious burn injuries in an explosion at a Chandler printing shop last month are out of the hospital. The owners of Platinum Printing, Dillon and Andrew Ryan, and their employee, Parker Milldebrandt, have been released from the hospital. Glenn Jordan, 58, was inside an eyeglass repair business when the explosion happened. He remains hospitalized. Federal investigators determined that the explosion was caused by an unintentional natural gas leak ignited by an independent ignition source.

The explosion happened at a print shop near Ray and Rural Roads at around 9:30 a.m. on Aug. 26, and rocked nearby homes. The victims were identified as Andrew and Dillon Ryan, brothers who own the print shop, along with Parker Milldebrandt. In addition, an employee at a nearby eyeglass repair shop was also injured.

"It’s amazing to me anyone walked out of that alive," said Dr. Kevin Foster, director of the Arizona Burn Center at Valleywise Health. "Yeah, it’s really baffling that this explosion of this magnitude and injuries were not worse than they are."

Authorities have said they have found no signs of foul play at the scene.

The explosion, which happened in the area of Ray and Rural Roads, leveled a printing business, and left three of its workers, as well as another person, with serious injuries. FOX 10's Nicole Garcia reports.

In a statement obtained by FOX 10, officials with Southwest Gas say the cause of the leak and subsequent explosion was premature degradation of a certain type of natural gas pipe that was installed at the location in 1999.

The type of pipe in question, according to Southwest Gas officials, was identified as Driscopipe 8000, which was purchased by the utility firm between approximately the years 1980 to 1999.

The gas in the line, according to officials, was odorized to levels required by state and federal regulations.

"No odor complaints were received from the print shop or the shopping complex which it was located in within the last 12 months," read a portion of the statement.

Southwest Gas officials say they have previously determined that the type of pipe in question has a low risk of degradation.

Officials say they have implemented a multi-year remediation effort to replace or abandon any pipe sections that were at risk, but an error in construction records misidentified the gas pipe type that was used near the building where the explosion happened. This resulted in the pipe being exempt from Southwest Gas' remediation efforts.

"Southwest Gas is in the process of investigating how that error occurred," read a portion of the statement.

Officials with the utility company say an investigation is ongoing.