Just a day after reopening despite guidelines set out by the state, the health department is demanding its closure.

PHOENIX - In Maricopa County, the COVID-19 positivity rate is too high for gyms to reopen according to the Department of Health Services (DHS) new red, yellow and green benchmark system that was released Aug. 10.

The system gives guidance on "paused businesses" to begin reopening.

The police came by multiple times Tuesday and they’ve received no tickets or fines. But, the next day, on Aug. 12, Arizona Department of Health Services issued a letter, demanding they close. 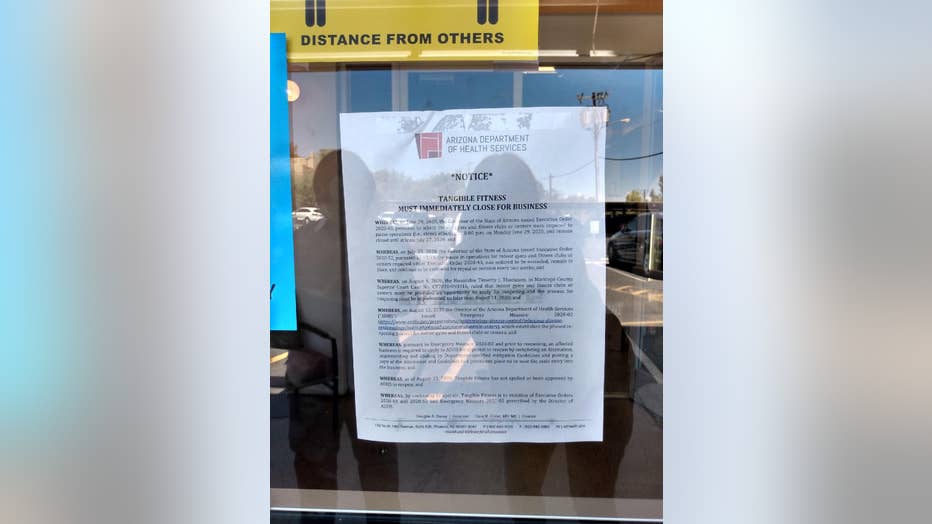 “The notice states I have to close due to the governor’s order," Scheimann said, reading the letter.

DHS served Scheimann the notice and left without taking questions.

“They went to hand it to my GM who was walking by. He said 'Do you want to speak to anyone?' She said, 'No, call the number,' and left. She was here for like 20 seconds," Scheimann explained.

Scheimann says he’s taken every precaution and he refuses to close, saying, “Oh yeah, I’m not gonna close. I’m sorry I can’t continue to close for what they call a 'pause.' The pause was 6 weeks. Now we’re gonna go with 8 weeks?

Nathan Shyia from Phoenix says he feels safe going to the gym.

"Get those endorphins going again. It’s priceless, a loss of words," he said.

Scheimann argues the governor failed to review his executive order on Aug. 10 as required every two weeks, but a spokesperson for Doug Ducey said the DHS guidelines were the review.

"I just can’t continue to be closed. This has gone on for a long time," Scheimann said.

The Phoenix Police Department, DHS and the governor's office did not respond to questions about whether the fitness club would be cited or not.

Tangible Fitness in Phoenix reopens despite not meeting reopening guidelines

Officers made several visits to the gym after people called to complain but no citations were given.