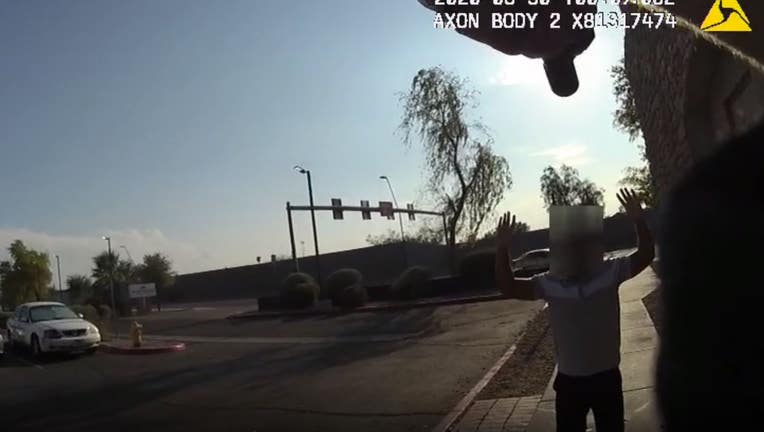 Body camera video showing police officer Robert Kerzaya holding Trevonyae Cumpian at gunpoint while searching for a suspect whose description did not match those of Cumpian.

PHOENIX - On Dec. 9, members of the Tempe City Council approved a deal to settle a lawsuit brought by a man who was held at gunpoint while police officers were looking for a white suspect at a hotel.

The settlement deal was approved in a unanimous vote as part of the city council meeting's consent agenda items, which are considered as a group. Other items in the consent agenda include various awards of bids and contracts, as well as appointments to city boards, commissions, and committees.

According to documents made available on the city's website, the city agrees to pay $300,000 to Cumpian to settle all claims related to the incident, while noting that the agreement does not constitute an admission of liability by anyone.

On Dec. 10, the city announced Tempe Police Officer Ronald Kerzaya will remain in an administrative role with the police department and will not return as a patrol officer for at least one year.

Kerzaya has begun serving a two-week paid suspension and will participate in a performance improvement process.

The incident happened on Aug. 29. Boda-camera video shows Kerzaya responding to a hotel, based on reports involving an armed white man.

While searching for the man, the footage shows Kerzaya holding Trevonyae Cumpian, who was working as a front-desk employee, at gunpoint despite Cumpian not matching the suspect description.

Footage shows Cumpian insisting that he was a worker, with Kerzaya cutting him off, saying, "I am responding to a man with a firearm who matches your description."

"Are you going to shoot me?" Cumpian was heard asking.

"Shut the f--- up with that s---, get on your knees," Kerzaya responded. He would not lower his gun until he confirmed the man was a hotel employee.

Kerzaya has been involved in controversy in the part, with police confirming that he was involved in an incident where he tased an unarmed man holding a baby during a domestic violence call in 2019. Officials say Kerzaya received de-escalation training afterward.

In September, Cumpian filed a $2.5 million claim against Tempe, while also calling for Kerzaya to be terminated due to his “blatant and continual abusiveness toward Black men.”

At the time, Tempe officials say Kerzaya was placed in an "administrative role."

"Our initial review indicates that this incident was not handled in accordance with the professionalism and respectful behavior that we, and the public, have for our officers," officials wrote.

Sylvia Moir, who was Tempe's police chief at the time, spoke with hotel employees about the incident due to its "concerning nature," according to the report. Moir resigned in September, and Jeff Glover became the interim police chief on Oct. 12. He is Tempe Police's first African American chief.

In a statement, officials with the Tempe Officers Association denied the incident was race-based.

"The officer involved was responding to a call involving an armed suspect who already had committed an assault. In real time, the officer was receiving information from the property manager. That information indicated the next person to come through the door would be the suspect.

The officer reacted instinctually and based on that information. We don’t agree that he was motivated by skin color. With that said, we believe the incident should be investigated thoroughly and potentially used as a tool to reassess the department’s policies and procedures."

Community members speak out about Tempe officer incident at hotel

Tempe officer Ronald Kerzaya is being investigated for holding a Black man at gunpoint while searching for a white suspect at a Hawthorn Suites hotel on Aug. 29.