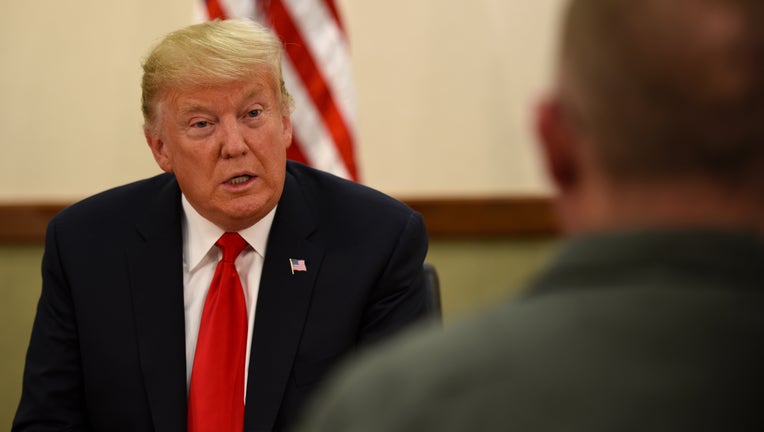 LITCHFIELD PARK, Ariz. (AP) - Six days before the 2016 election, a confident Hillary Clinton landed in Phoenix in an audacious play to flip a longtime Republican stronghold into the Democratic column.

She still lost to Donald Trump in Arizona, and her gambit came to symbolize in some quarters her neglect of the industrial Midwest, where Trump’s razor-thin victories in Wisconsin, Michigan and Pennsylvania secured his victory.

Four years later, Arizona is no longer an ironclad GOP stalwart but a central battleground in the fight for the presidency. A fast-growing Latino population — politically activated over the past decade by anti-immigrant legislation and politicians like Sheriff Joe Arpaio — and explosive growth among Trump-skeptical suburbanites has lulled Republicans from complacency and energized Democrats.

Trump’s re-election campaign pulled out all the stops this week in hopes of keeping Arizona’s 11 electoral votes. Nearly every day, someone with the last name Trump or Pence stumped for votes in Arizona beginning with Donald Trump himself on Sept. 14 and finishing with Vice President Mike Pence on Sept. 18. The president’s daughter, Ivanka Trump, and the vice president’s wife, Karen Pence, also made appearances, and presidential son Donald Trump Jr., is expected in Chandler on Tuesday.

“The road to victory runs right through Arizona,” Pence said Friday during one of two public events in Arizona.

Vice President Mike Pence is set to appear at events in Phoenix and Litchfield Park on Sept. 18 for the reelection campaign of President Donald Trump.

Trump’s visit on Monday was his fifth to Arizona this year, a reflection of the state’s importance in his hopes for re-election. One of his first trips outside the White House during the coronavirus pandemic was to Phoenix, where he visited a new mask factory. Pence has made three trips to the state.

Vice President Joe Biden, the Democratic nominee, has said he’d visit Arizona after Labor Day but has not announced any specific plans. His outreach to Arizona has been driven by online events with surrogates, including last week with his wife, Jill Biden, and running mate, California Sen. Kamala Harris.

Recent public polling has consistently shown Biden with a narrow lead over Trump in Arizona.

The Trump campaign’s Arizona push this week focused especially on wooing Latinos, a group of voters that is overwhelmingly backing Biden. Trump hopes he can tamp down Biden’s strength with Hispanics to offset losses of white voters who have soured on him.

Trump made his case to a crucial group of voters at a resort in Ahwatukee in the final stretch of the campaign.

“Latinos need the free market and the free market needs Latinos,” Pence said at a roundtable in Phoenix hosted by the Libre Institute, a right-leaning group that says it engages and informs the U.S. Hispanic community on the benefits of a free and open society, limited government, free enterprise and property rights.

Later, he courted veterans at a resort in Litchfield Park, a suburb west of Phoenix.

“Donald Trump reveres all those who serve in the uniform of the United States, like no other president in my lifetime,” Pence told an enthusiastic crowd of several hundred.

Biden is stepping up his outreach to current and former members of the military after an article in “The Atlantic” magazine alleged that Trump disparaged people who serve in the military and those who died in war. The allegations feature prominently in an ad aired on Friday by the Biden campaign in Arizona and several other swing states. Trump has denied disparaging the military and notes increased funding for the armed forces.

“I will never support an individual who does not have the empathy, the understanding for those who have given their lives for this country,” former Maricopa County Attorney Rick Romley, a Republican who is backing Biden, said in a Friday conference call organized by the Arizona Democratic Party.

Since Harry Truman won Arizona in 1948, the state has given its electoral votes to a Democrat only once — to Bill Clinton in 1996, when he was re-elected by an overwhelming electoral college margin.

Democrats were emboldened by the 2018 victory of Sen. Kyrsten Sinema, the first Democrat to win a Senate seat here in three decades. Democrats also won three statewide offices, five of nine congressional seats and made big gains in the state Legislature that year.

Trump has built a grassroots army and has been actively organizing in Arizona for more than a year.

The first daughter, Ivanka Trump, calls Arizona a success story of how to rebound after being hit hard by the COVID-19 pandemic during a roundtable Sept. 16 in Phoenix, Arizona.

Biden did not campaign here ahead of the March primary, which he won comfortably over Bernie Sanders, and he lagged Trump in building out a grassroots organization here. He has since staffed up and is piggybacking on the extensive infrastructure Democrats created to support Senate candidate Mark Kelly, a retired astronaut who is mounting a formidable challenge to Republican Sen. Martha McSally.

McSally was appointed to the late Sen. John McCain’s seat by Republican Gov. Doug Ducey after she lost to Sinema in 2018. Polling shows she’s well behind Kelly as she faces a November special election to fill out the final two years of McCain’s term.

Unaffiliated groups have their own operations backing Biden, including unions and grassroots Latino organizations. The Lincoln Project, founded by anti-Trump Republicans, is also working to block Trump and McSally.