PHOENIX - If you watched the Miami Dolphins and Cincinnati Bengals game on Sept. 29, you'll know it was a scary situation on the NFL stage when the Dolphins' quarterback was taken off the field on a stretcher due to a head injury.

Since then, the incident sparked a nationwide discussion on concussion protocols.

The NFL Players Association (NFLPA) is investigating protocol and why Tua Tagovailoa was able to play after appearing to injure his head not long before this game.

A former Arizona State quarterback who retired from football because of his concussion history is giving his take on this discussion. It wasn't easy for him to watch.

Steven Threet says when he last played at ASU more than a decade ago, he knew something was wrong with the last hit to the head.

"So my history with concussions started in high school," he said. From then on, Threet says he sustained up to 15 concussions in his young career.

He's coped with daily headaches and pain. Ultimately, playing his last snap as quarterback for ASU in 2010 before leaving the game he loved for good.

"I would look at the wrong sideline for signals. I would, you know, kind of need to clear my head or clear the cobwebs. It's difficult being that it's more of an invisible injury," he explained.

Tagovailoa was sacked, and thrown down with his head slamming against the ground. Fans watched his hands freeze in front of his face as he laid on the field for about seven minutes before he was taken to a hospital.

"It was very scary to see. You could tell that it was a serious injury, and definitely from the fencing response, the fencing pose that you know the brain was severely affected," Threet said.

A similar type of impact was seen while he was playing against the Buffalo Bills. Tagovailoa briefly left the game.

The Dolphins originally said it was a head injury before it changed to a back injury. Now, the players association and the NFL are investigating what allowed him to return.

"We are all outraged by what we have seen the last several days and scared for the safety of one of our brothers. What everyone saw both Sunday and last night were ‘no-go’ symptoms within our concussion protocols. The protocols exist to protect the player and that is why we initiated an investigation," said the NFLPA, in part. 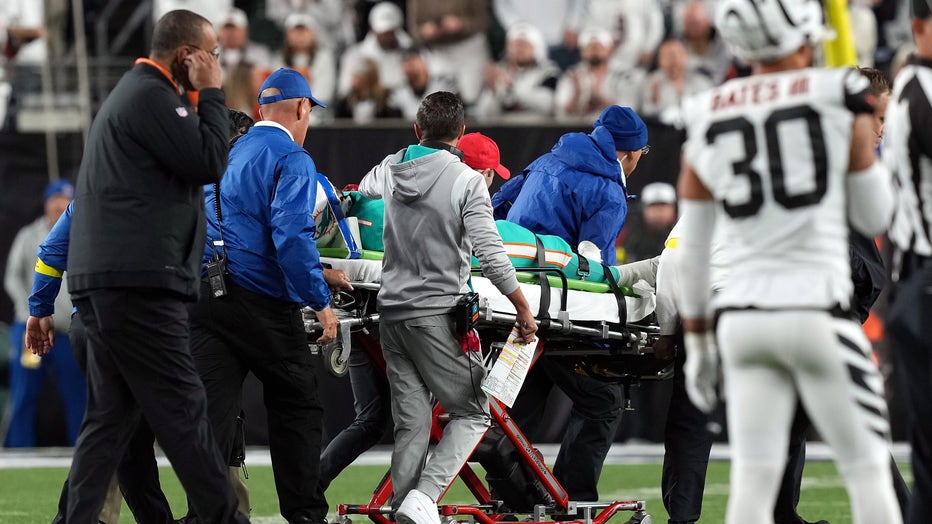 CINCINNATI, OHIO - SEPTEMBER 29: Medical staff tend to quarterback Tua Tagovailoa #1 of the Miami Dolphins as he is carted off on a stretcher after an injury during the 2nd quarter of the game against the Cincinnati Bengals at Paycor Stadium on Septe

Carrie Collins is the CEO of the Brain Injury Alliance of Arizona.

"This is a good lesson for all of us that when an event occurs like a concussion, it’s a good opportunity to take a moment, take care of yourself, follow the protocols. They’re there for a reason, they’re there to protect your health," Collins said.

She says traumatic brain injuries often happen, not just during sports, and those symptoms must be taken seriously.

According to the Brain Injury Alliance, more than 66,000 traumatic brain injuries happen in Arizona each year.

Tagovailoa tweeted that he’s feeling much better, and he’s grateful for all the support he's received.

Karin Dechant is a football mom in Phoenix and says she's a bit anxious when she watches her sons play.

"I just watch the clock, and I'm just anxiously waiting for the final whistle to ring, so we made it through another game without getting hurt," she said. "In the end, your brain has to be with you for your entire life. The first time my son gets a bad concussion, we’re done."

"Equipment is better, helmets are better, everything is better. I think for the most part most people are way more concerned," Lehman said.