Tyler Moldovan: Phoenix Police officer who was shot while on duty released from hospital; starting rehab

Moldovan, 22, was shot while looking for a suspect in December 2021. FOX 10's Nicole Garcia reports.

PHOENIX - Officials with the Phoenix Police Department say officer Tyler Moldovan, who was shot and put on life support more than a month ago, has been released from the hospital, and will head to rehab for his injuries.

According to police, Officer Moldovan left St. Joseph's Hospital on Jan. 24, having been at the hospital's Intensive Care Unit since Dec. 14.

In a social media post, Officer Moldovan's wife, Chelsea, posted that the 22-year-old officer is going to rehab.

"Oh Jesus You have heard our cries. You have heard the fervent prayers. The impossible is being made possible. We graduated to rehab! Your miraculous works are before us for every eye to see and every ear to hear," read a portion of the post.

Phoenix Police officials did not say where Officer Moldovan was transferred to, although family friends have told us that he was moved to an out-of-state facility.

On Jan. 11, Chelsea released a statement through the Phoenix Police Department, saying her husband suffered extensive neurological injuries, is in stable condition and remains on a ventilator.

At the time, the Moldovan family said they appreciated everyone’s support, while requesting privacy.

"We have been praying for a miracle and see glimpses of one every day," she said. "We know that Tyler recognizes those around him and responds with facial expressions like smiling. When no one thought he would, he opened his eyes. We hold onto our faith that Tyler will continue to make progress. He has been a miracle already and the progress he has made in three weeks alone is marvelous; the impossible is being made possible."

The community came together on Jan. 29 to raise money for the young officer who is continuing to make a miraculous recovery.

Limon Urban Kitchen in north Phoenix collected money and set aside 15% of their proceeds for Moldovan. "Ever since he got hurt, we just wanted to help out as much as we could and this is how we could do it – by the community coming together," said Ryan Ray with the restaurant.

He added, "It’s just terrible what happened to him and it’s so crazy how strong he is and made it through this, so we just want to help out his family as much as we can."

Those who attended the fundraiser shared why it's important for them to show support.

"We are all about the local police and fire departments," said Phoenix man Tim Davis. "I’m very thankful."

Danice Davis agrees, saying, "They’re out there doing it for us so the least we can do is do it for them."

Moldovan shot while on duty; suspect identified and indicted 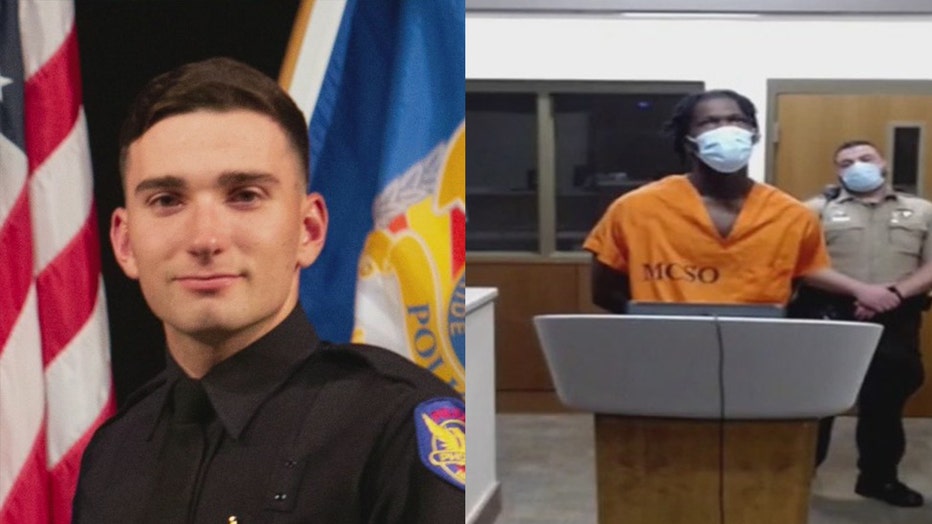 Officer Moldovan, according to earlier reports, was shot as police searched for a man seen running from a car that reportedly had been driven erratically a short time earlier.

The suspect, identified in court documents as 24-year-old Essa Kolareh Euge Williams, was arrested on Dec. 14. He was not present in court during his brief arraignment hearing, and a $3 million bond was set for him.

Doctors say gunshot wounds to the head often turn fatal, but there are rare occasions when that is not the case.

A Dec. 23 indictment charged Williams with attempt to commit first-degree murder, attempt to commit aggravated assault with a deadly weapon, resisting arrest and three counts of being a prohibited person in possession of a firearm.

Williams has nine prior felony convictions, including armed robbery, aggravated assault and endangerment, the probable-cause statement said. He was sentenced to multiple prison terms in 2017 and was released in 2020, according to Arizona Department of Corrections, Rehabilitation and Reentry records.

Williams is expected to go on trial in April.

A community stunned, in silence, hoping for the best. "We knew as a community we needed to come together and do a prayer vigil for him," said a community member at the vigil for Phoenix Police Officer Tyler Moldovan on Dec. 21.

Since Officer Moldovan was shot, police and state officials, as well as members of the community, have rallied around him.

"What we have learned is Tyler is a fighter, and he has fought," said Sgt. Ann Justus with the Phoenix Police Department.

Gov. Doug Ducey also tweeted, saying the officer "is a fighter through and through."

"Arizona continues to pray for him. We wish Officer Moldovan, his loved ones and his fellow officers strength through his recovery," read the tweet.

Chelsea Moldovan, the wife of Officer Tyler Moldovan, released a statement through the Phoenix Police Department on Jan. 11, saying her husband suffered extensive neurological injuries, is in stable condition and remains on a ventilator.

Sgt. Ann Justus with the Phoenix Police Department says, "Tyler is a fighter, and he has fought." She adds, "The fight is not over. It’s still definitely an uphill battle, but these baby steps are nothing short of miraculous."