PHOENIX - Two Confederate monuments on Arizona state property, including one at the Capitol, have been removed.

Arizona Department of Administration officials say they have received a letter from the United Daughters of the Confederacy that was dated June 30. In the letter, officials with the organization asked state officials to return the Memorial to the Arizona Confederate Troops monument, located at Wesley Bolin Plaza in Downtown Phoenix, as well as the Jefferson Davis Memorial Highway marker along State Route 60 near Gold Canyon.

Jefferson Davis was the Confederacy's first and only president. 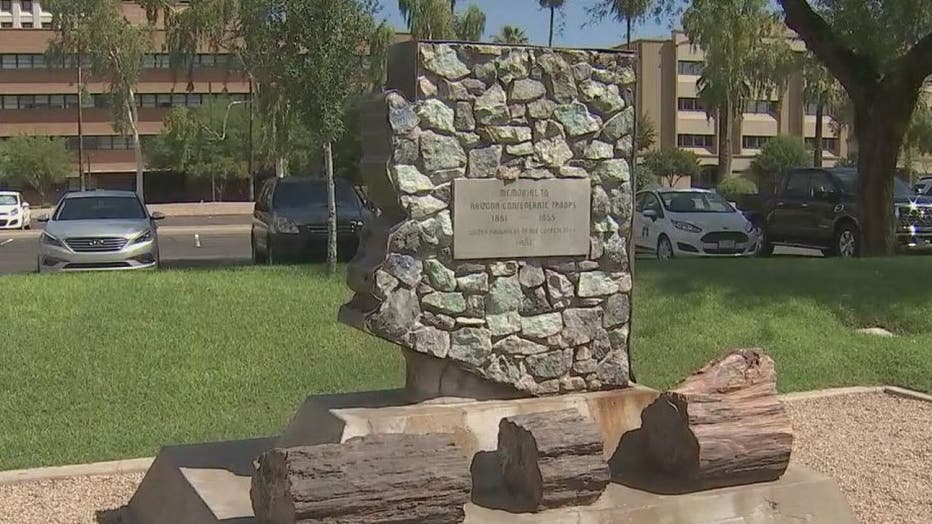 "These monuments were gifted to the State and are now in need of repair but due to the current political climate, we believe it unwise to repair them where they are located," read a portion of the letter. "It is the wish of the Arizona members of the UDC and the Monument Restoration Committee that the State facilitate this regifting as swiftly as possible to avoid any further damage, vandalization or complete destruction."

Megan Rose, a spokeswoman for the Department of Administration, did not say where the monuments will end up but said they’ll be moved to private property at no cost to the state.

The Phoenix city council has taken initial steps to rename a street named for Robert E. Lee, the commander of the Confederate army. A marker still stands at Picacho Peak north of Tucson dedicated to Confederate soldiers who defended the area during a skirmish touted as the westernmost battle of the Civil War.

At least 63 other Confederate statues, monuments or markers have been removed from public land across the country since George Floyd’s death on May 25, making 2020 one of the busiest years yet for removals, according to an Associated Press tally. Most were removed by government officials, though protesters have toppled some.

According to a database maintained by the Southern Poverty Law Center, there are five symbols of the Confederacy in Arizona.

The two monuments named in the letter were previously targeted by vandals.

In August 2017, FOX 10 reported that the highway marker was tarred and feathered, while the monument at Wesley Bolin Plaza was spray-painted white.

The monument at Wesley Bolin Plaza was again targeted in June 2020, when a man allegedly threw red paint over it. The man was later arrested.

Calls for removing the Memorial to the Arizona Confederate Troops monument grew in June 2020, when Secretary of State Katie Hobbs, as well as a group of Arizona veterans, called for the monument's removal.

"This is a monument that was erected to honor soldiers who rose up against our country, doing treason to protect the practice of slavery, and these monuments around the country were erected during the time of the Civil Rights Movement as a form of intimidation, and it really has no place in Arizona," said Hobbs at the time.

At the time, a member with the Sons of Confederate Veterans said the monument should not be removed.

"From our perspective, the monument of the Confederate soldiers is relative to Arizona, primarily due to the amount of contributions they have given to the state," said Robert Johnson. "These are American veterans, so from our perspective, we can't let their sacrifice and courage be washed away."