The recount results are in for the Arizona attorney general's race, and it has decided one of the closest races in Arizona's history. FOX 10's Irene Snyder reports.

The highly anticipated results announced on Dec. 29 in Maricopa County Superior Court showed that Mayes finished 280 votes ahead of Hamadeh, down from a lead of 511 in the original count.

"Today we are looking forward," Mayes said. "I am going to return the office of the attorney general to respectability by refocusing on the issues that matter to Arizonans, not wasteful partisan politics and games."

Pinal County released a statement addressing the vote discrepancy, stating that they identified a nearly 500-vote undercount in their election "attributable to human error."

"This undercount amounts to a .35% variance across a total County-wide vote count of around 146,000 casted ballots," officials said in a statement. "In other words, the recount demonstrated that Pinal County exhibited an election consistency rate of 99.65%. Although not perfect, this consistency rate is within the State’s predetermined .5% statutory margin."

Election law attorney Eric Spencer says a slight deviation in the vote is common in recounts.

"So this came out the way I thought it would, which is a reaffirmation that the machine counts were accurate and the winners were accurately declared right after the election," Spencer said.

Judge Timothy Thomason, who also announced the results of recounts in two other races, said Republican Tom Horne prevailed in the race for state superintendent of public instruction and Republican Liz Harris won a state legislative seat in the Phoenix suburbs.

The automatic recounts were required because the races were so close.

Hamadeh, who hasn’t conceded to Mayes, had filed a separate challenge of the results in his race, but a judge dismissed that case last week.

Hamadeh alleged problems with ballot printers in Maricopa County had led to a series of issues that disenfranchised voters and that his race was affected by improper handling of ballots that were duplicated or adjudicated by people because they could not be read by tabulators. In throwing out the lawsuit, a judge concluded Hamadeh didn’t prove the errors in vote counting that he had alleged.

In the race for superintendent of public instruction, Horne ended the recount with a 9,188-vote lead. Hoffman had previously conceded to Horne, a former schools chief who served one term as attorney general before losing the 2014 primary. Horne posted a net gain of 221 votes in the recount.

Harris won with a 275-vote advantage over Republican Julie Willoughby in the race for a seat in state House District 13, which includes parts of the Phoenix-area suburbs of Chandler, Sun Lakes and Gilbert. Harris had a net gain of five votes in the recount.

Although Republican Kari Lake filed an unsuccessful lawsuit challenging her loss to Democrat Katie Hobbs in the Arizona governor’s race by just over 17,000 votes, the governor’s race wasn’t close enough to trigger an automatic recount.

Recounts are required in Arizona in races where the margin between the leading candidates is 0.5% or less. Hobbs defeated Lake by 0.67%.

The judge who dismissed Lake’s case rejected her claim that problems with ballot printers at some polling places on Election Day were the result of intentional misconduct.

Lake, who has not conceded to Hobbs, is appealing the dismissal of her lawsuit with the Arizona Supreme Court. Hobbs takes office as governor on Monday.

Once a Republican stronghold, Arizona’s top races went resoundingly for Democrats. In addition to Hobbs and Mayes, Democratic Sen. Mark Kelly was reelected and Democrat Adrian Fontes won the race for secretary of state. 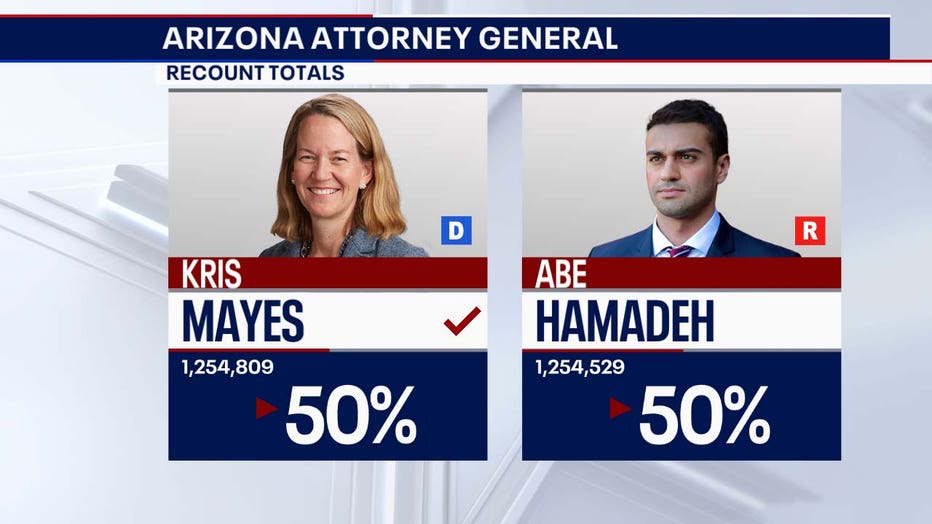 "I'm thankful for my campaign, transition and legal teams. I'm excited and ready to get to work as your next Attorney General and vow to be your lawyer for the people."

"This is a battle fighting for the transparency of Arizona elections and we continue to uncover significant issues within our flawed systems including over 4000 provisional ballots that remain uncounted. Transparent elections are fundamental to a democracy.

A discrepancy this big in the recount calls for an inspection of all of the ballots.

We will continue to fight this and owe it to the voters in Arizona to look at this from every single angle until we restore trust in our election system." 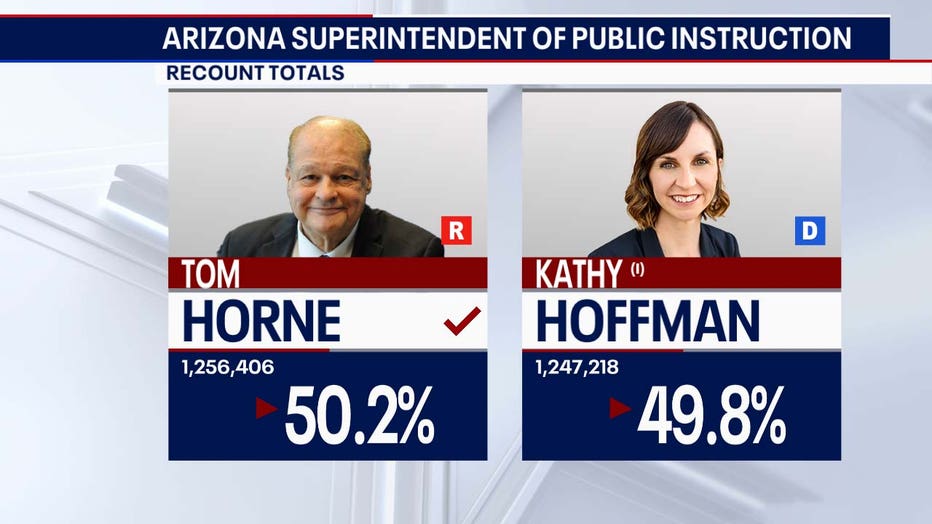 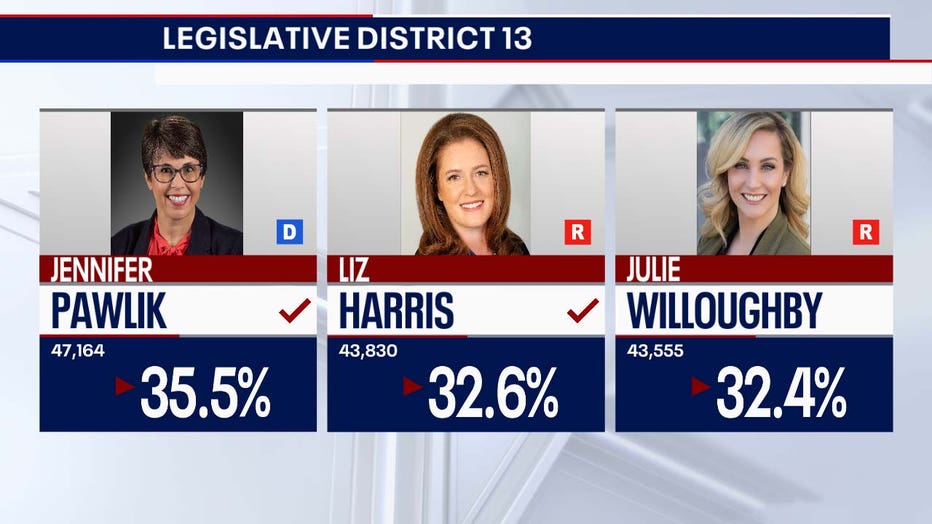 Recount results from the November election in Arizona should be finished by Dec. 29. In all, two statewide races were subjected to a recount: the Attorney General and the Superintendent of Public Instruction. State Legislative District 13 in Maricopa County was also subjected to a recount.

Results from Arizona's November midterm election were made official on Monday, Dec. 5.

When the same group certified the 2020 election, Ducey silenced a call from then-President Donald Trump, who was at the time in a frenetic push to persuade Republican allies to go along with his attempts to overturn the election he lost.

"This is a responsibility I do not take lightly," Ducey said. "It’s one that recognizes the votes cast by the citizens of our great state. Pursuant to state law on the fourth Monday following the general election, the current secretary of state in the presence of the governor, and the attorney general must canvass the election. That's the law."

"Arizona had a successful election, but too often throughout the process, powerful voices proliferated misinformation that threatened to disenfranchise voters … democracy prevailed, but it's not out of the woods," said Secretary of State and Governor-elect Katie Hobbs. 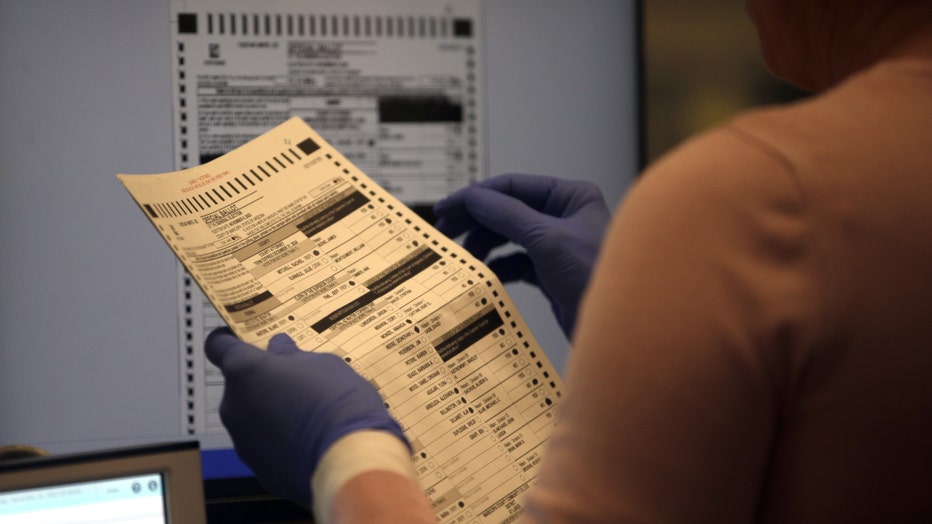