COOLIDGE, Ariz. - A group of daring veterans have been preparing for weeks in Coolidge, Arizona for the stunt of a lifetime: they're attempting to set a world record in skydiving.

It's a team of 10 veterans, all retired or former special operations personnel. And they're ready to take on the Triple 7 Expedition.

"Triple 7 is jumping all seven continents and basically the fastest time that you can," said skydiver Mike Sarraille. "No one has ever done it. We’re starting in Antarctica, then going to South America, Miami, Barcelona, Egypt, UAE, ending in Perth. We are coming back for a celebratory jump in Tampa, Florida."

Sarraille is a Marine and Navy veteran and the founder of Legacy Expeditions, an extreme adventure company run by veterans, for veterans.

He's leading this fearless group in an adventure that is about more than setting a record. Each team member is jumping for a veteran who gave their life in service.

"When you lose brothers, you go through a process, and that process never really stops," Sarraille said. "[It] leaves a fingerprint on you that never goes away. They want us to live, and we’re going to do that to the fullest, and if we can tell their story while we do it, then that’s a victory.

"I’m jumping in honor of NA2 to Michael Monsoor, who is a SEAL who’s posthumously awarded the Medal of Honor for jumping on a grenade 3 feet from me," he continued. "He gave his life for me."

The team has spent weeks training at the Complete Parachute Solutions Facility (CPS) in Coolidge.

Funk says the team will stay in close proximity, with the most experienced jumper leading.

The logistics of all 7 jumps were designed and planned in a way to ensure success, meaning the world record of six jumps in six days on six continents can be beat.

"The biggest thing that we'll probably be dealing with from an adversarial perspective is sleep deprivation," said jumper Glenn Cowan.

For skydiver Jariko Denman, the expedition is meant to inspire.

"A byproduct of this expedition is to continue to inspire the next generation of veterans to go out and do big things," Denman said. "Your service doesn’t end when you stop serving in whatever your branch of the military."

Sarraille says all the jumpers will gain something different, but all will give a piece of themselves like their fellow veterans did."

"It’s a jump of gratitude, I know Antarctica in particular I’ll be thinking about Mikey and his family and the fact that I'm alive, and I get to do this because of him and his family," Sarraille said. "The people who raised him to be the man, selfless man that he was."

The team leaves for Chile on Dec. 29. The attempt to set the record will begin in Antarctica on Jan. 9.

In addition to their world record attempt, the team is raising money to fund 1400 scholarships for Gold Star Families with the Folds of Honor Foundation. 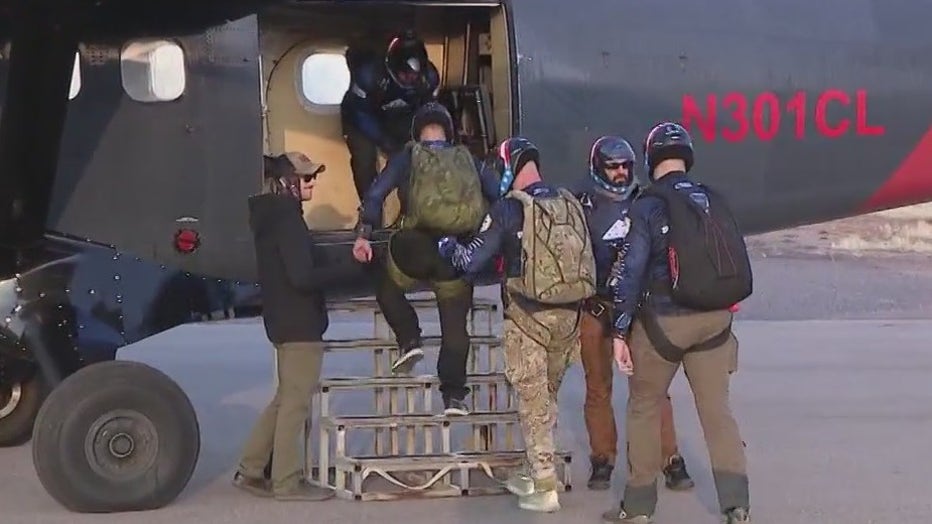 The skydivers load onto a plane for their training.