Charles Ryan is accused of pointing a gun at police outside of his home near Rural and Warner on Jan. 6.

According to a statement released on Jan. 7, officers went to an area near Rural and Warner Roads for reports of a person with possible self-inflicted gunshot wound. When officers arrived at the scene, they learned that it was Ryan who was inside the home.

"Mr. Ryan’s wife and adult daughter safely exited the residence and spoke to officers outside," read a portion of the statement.

Police officials say officers tried to communicate with Ryan via phone and announcements over a marked Tempe Police vehicle.

"At one point, Mr. Ryan opened the door leading from the house into the garage, and pointed what officers determined to be a gun at officers standing behind the rear of an armored vehicle. Officers attempted to use less lethal force and made clear announcements for his surrender, which were unsuccessful, and Mr. Ryan retreated into the house," a portion of the statement read.

Officials say a short time after Tempe Police's tactical team and negotiators arrived at the scene, Ryan left the home, and was safely taken into custody. They say Ryan suffered a self-inflicted gunshot wound to his hand, and was taken to the hospital for treatment.

"Mr. Ryan remains in the hospital as a result of his self-inflicted injury under police watch, and will face pending criminal charges upon his release," read a portion of Tempe Police's statement.

The Tempe Police Department submitted multiple charges against Ryan to the Maricopa County Attorney's Office for review on Jan. 19, including two counts of aggravated assault on a police officer and unlawful discharge of a firearm.

Ryan retired from corrections department in 2019 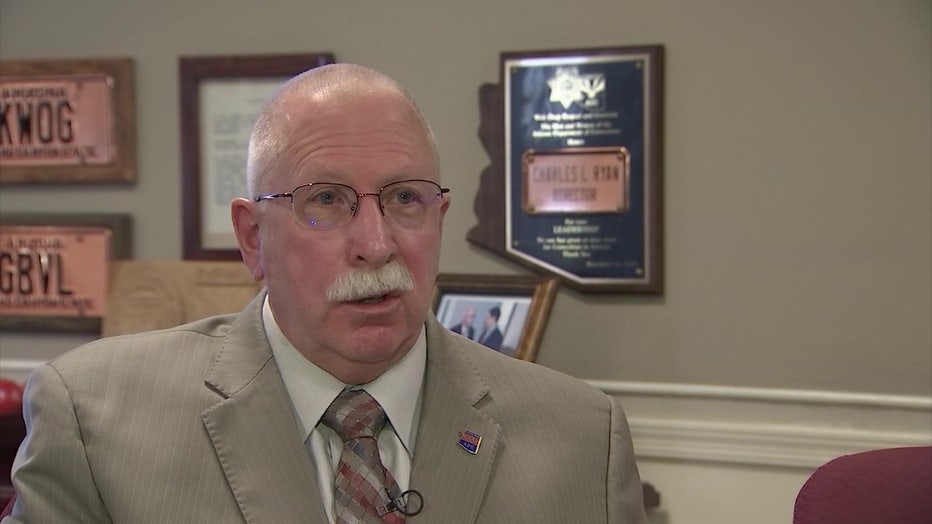 Charles Ryan, former director of the Arizona Department of Corrections (From Archive)

Ryan announced in August 2019 that he plans to retire from the Department of Corrections in September that same year, after a little more than 10 years at the helm of Arizona's prison system.

"I am eternally grateful to the thousands of courageous men and women who have served in this incredible agency since its establishment in 1968," Ryan wrote at the time.

Ryan, according to the Department of Correction's website, was appointed to the position by Gov. Jan Brewer.

In October that same year, Gov. Doug Ducey announced that David Shinn has been appointed as Ryan's replacement.

Prior to Ryan's retirement, he faced growing pressure from civil rights advocates, who started a "Fire Chuck Ryan" campaign over alleged inhumane conditions in prisons.

Ryan also faced other controversies. In 2018, a judge last year found Ryan in contempt for failing to follow through on promises to improve inmate health care, and the state was fined $1.4 million.

Earlier in 2019, the department was rocked by revelations that inmates at the Lewis prison complex, located west of Phoenix, were able to open their locked cell doors and attack corrections officers and other prisoners.

In that same year, a Lewis prison inmate held a librarian hostage by holding a knife to his throat. The incident ended after the inmate was hit with rubber bullets and pepper spray.

In April of 2019, critics furious over the practice of fixing broken prison cell doors with simple padlocks boiled over. Prison staff union and an inmate advocacy group came together and demanded answers and accountability. At the time, both camps stopped short of demanding Ryan's resignation.