Girl adopted by local family gets puppy as gift for Christmas

PHOENIX - A West Valley family celebrated their first Christmas with their newest child.

After the Cahill family adopted a 10-year-old girl formerly named Emma Hickman, they became a family of five.

One of the first Christmas gifts they gave to Emma brought her to tears. As it turns out, Emma wasn't the only one adopted into the Cahill family this year.

Emma is getting used to being the baby of a family of five and having two older brothers, and her adoptive mother, Christina Cahill, is also getting used to having a daughter.

"We were able to adopt her on National Adoption Day in November," said Christina. "I had to learn how to do her hair, and even putting in earrings was challenging. So it was a complete change of lifestyle."

Although it is a time of gratitude and celebration, it's also a challenging time for Emma, as she processes the transition. It's been a season filled with tears and sadness, as she recalls the end of one chapter.

"My real mom and dad, they started fighting and I didn't like it when they did it in front of me," said Emma.

It's also a season filled with tears of joy, as a new chapter begins. Emma cried when she realized she has received a gift, in the form of a new puppy. 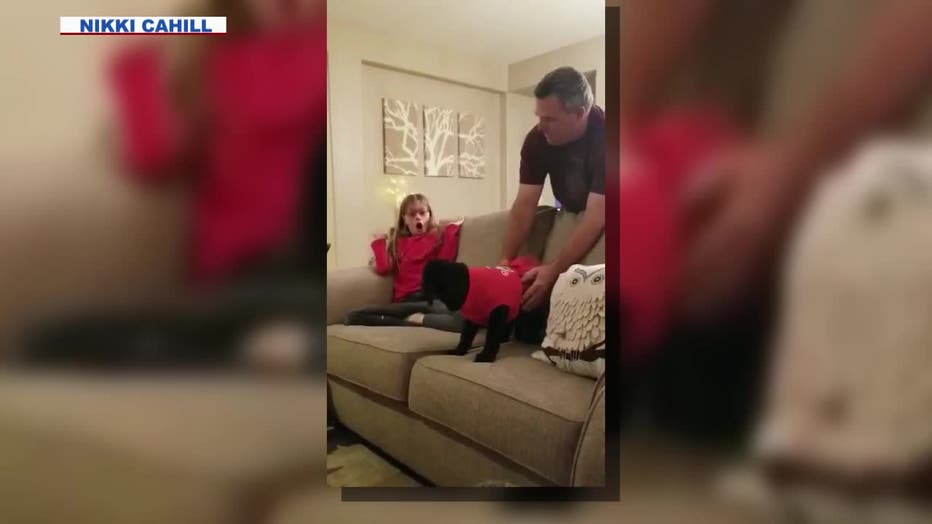 "I wasn't expecting my mom and dad to give me a puppy," said Emma.

A new family, a new puppy, overwhelmed by emotions. It's a lot for a foster child, and her parents understand. While Emma received more than she ever dreamed of this Christmas, her mother says, they received the ultimate gift in Emma: she's the new addition that completes their family.

"We had tried to have another one eight years ago, and it just didn't work out, unfortunately," said Christina.