The 25th Annual Phoenix Veterans Day Parade marched through the streets of Central Phoenix on Nov. 11, honoring those who served our country.

PHOENIX - Thursday, Nov. 11 is Veterans Day, and a parade to honor those who served marched through central Phoenix – for the 25th year.

All the pomp and circumstance was included with a message of thanks for the men and women who served our country.

The parade was on the move, with streets lined with men and women and boys and girls, both young and old.

‘Waving the Flag of Freedom’ 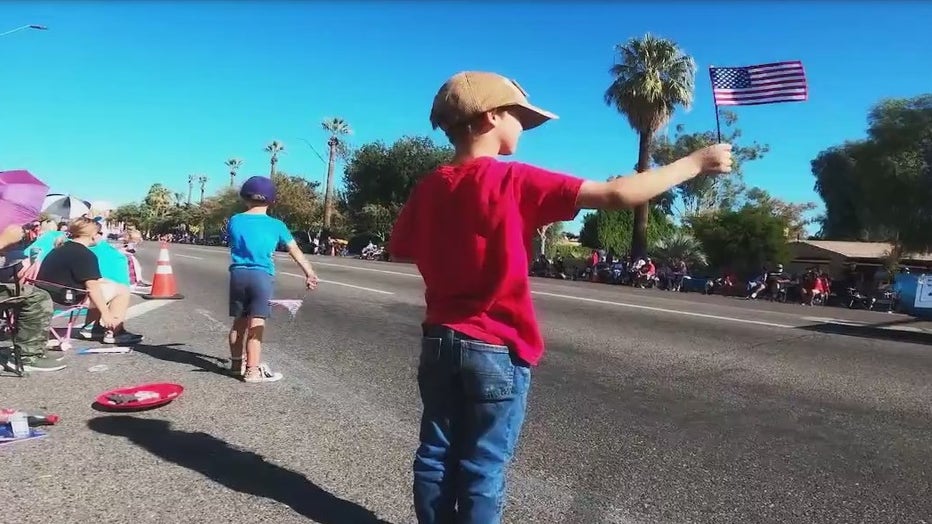 It was the 25th annual Phoenix Veterans Day Parade and this year's theme was "Waving the Flag of Freedom."

There were nearly 80 entries in the parade, ranging from high school marching bands, to the ROTC, color guard, and military members.

There were also a few flyovers, vintage airplanes, and military helicopters.

Veterans Day started in the late-1930s as a way to honor the soldiers of World War I.

It's still going strong to this day.

The parade began at North Phoenix Baptist Church at Central and Montebello, then marched south on Central, then east on Camelback, and turned south onto 7th Street to Indian School Road.

‘Be good to each other’

"Well, it’s a special day for me. I am a veteran of the Air Force. And I’m out here to thank other veterans for their service," said Veteran Tiffany Carrington.

Ron Morris, a veteran says it's important to honor our veterans.

"I think as a nation we need support and that we honor them and this is the way I feel the best way to honor them," Morris said.

His wife Linda agreed, saying, "We come every year and I’m happy to be here because that’s why we have freedom – because of our veterans."

Janice Bovee is a mother of a veteran and says, "We have to remember who we are and where we came from … how important it is to be good to each other."

MORE: Veterans Day 2021: 'Make Camo Your Cause' and support those who have served

Chan began serving his country in 1943 as a pilot during the war flying across Europe. After retiring from the service, Chan worked for an aerospace and defense company as an inspector general.

Female veterans who are survivors of sexual trauma and in need of affordable housing are being helped in a big way as Habitat for Humanity is working to build two new homes specifically for these women in Phoenix.

The parade had to scale back last year due to the pandemic, but it was back in full force on Nov. 11 with more than 100 floats participating and thousands coming out to show support for military veterans.