Mother raises awareness about fentanyl overdose after losing her son

Fentanyl is now being called the 'most dangerous drug' as overdose deaths increase across Arizona, and a mother is doing what she can to raise awareness for the problem.

PHOENIX - The amount of opioid related deaths have skyrocketed during the COVID-19 pandemic and has continued to rise ever since. Now local officials want people to be on high alert to combat this issue – which is impacting the entire country, but it's really starting to grip border states, including Arizona.

"Thing is, when this happens, it's too late. There's nothing, there's no redo's, no go-backs, you can't do anything." said Ashlee Brown.

Brown lost her 19-year-old son to an accidental fentanyl overdose on Mother's Day back in 2020.

"My son would never, ever do something that he knew would kill him or even hurt me to this point."

He took what he thought was Percocet, but it was instead laced with a lethal dose of fentanyl. She's now raising awareness to make sure this doesn't happen to others.

"And it's not a white Black thing, Mexican thing.. it's everybody… it's everywhere now. Every pill, anything you buy on the street, even marijuana is laced with fentanyl now, so nothing.. nothing is safe to buy on the streets," said Brown. 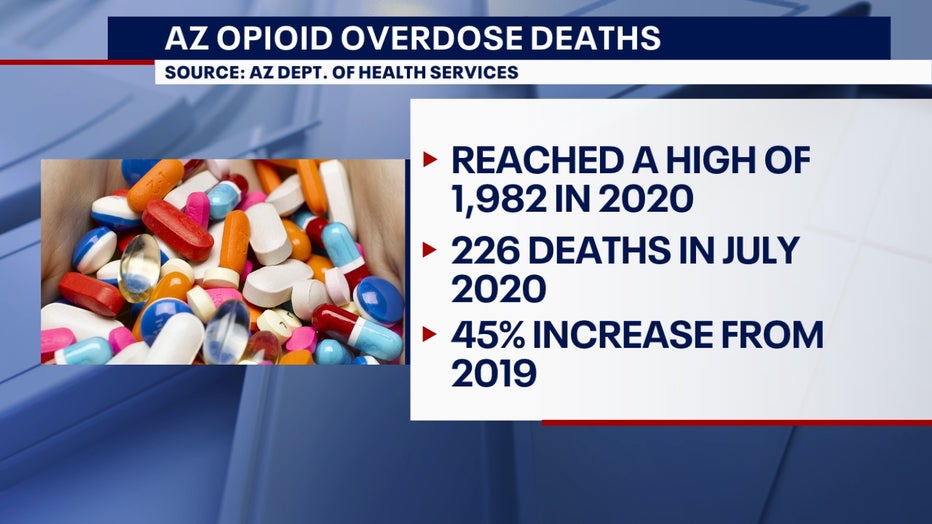 "The United States has an appetite for drugs, and they're the people who are going to feed that appetite and they're going to take advantage of it," said Col. Heston Silbert of the Arizona Department of Public Safety, which is dealing with fentanyl seizures from Mexican cartels daily.

"The cartels have super labs, and therefore, they can push that volume through the roof. And again, it's a smaller package. It's easier to transport across the border," he said.

To help combat the issue, DPS has a dedicated bureau on patrol 24/7, trying to intercept as many loads as possible.

"We're the vascular system for the drug cartels with Mexico and I'm not pleased to say that, but that's what our state is used for," said Silbert.

For now, Brown has started a non-profit in honor of her son and is hoping to start a petition and a protest to potentially charge drug dealers with murder.

The Arizona Dept. of Health Services provides Naloxone to law enforcement and community organizations. It's a drug that reverses an overdose, and they will soon hand out fentanyl testing strips so people can check their medications for lethal doses.

The amount of opioid-related deaths skyrocketed during the COVID-19 pandemic, and those numbers have continued to rise since. FOX 10's Stephanie Bennett reports.