An Arizona family is asking anyone with information about where a widow's husband's ashes could be to come forward after their storage was ransacked during a home repair.

CHANDLER, Ariz. - Thieves stole something very personal and irreplaceable to a Chandler family during a home repair, and now they’re asking for help in getting it back.

What was stolen were the ashes of a woman’s husband, which she had kept for nearly two decades after his death. His ashes were stolen along with many other items.

Glenda Cota says her storage unit in her carport was ransacked just before New Year's Eve. She lives in an apartment complex near Elliott Road and Arizona Avenue. Two motorcycle dirt bikes were stolen, and nearly all the clear storage boxes inside the closet, containing family keepsakes and photos, were taken.

It’s something she can't understand, saying the boxes were clear, and you could see what’s inside them. While the items hold no value for the thieves, they are the only mementos she has of her son’s father, who died in a car accident 17 years ago while she was seven months pregnant.

The closet inside her home where her precious memories were usually always stored, was getting repaired, so she put them in a storage unit temporarily.

The ashes are in a white cardboard box. Within that box, it has a box made of pinewood where her husband's ashes are stored. The box is labeled with his name, Jason Derek Affolter. 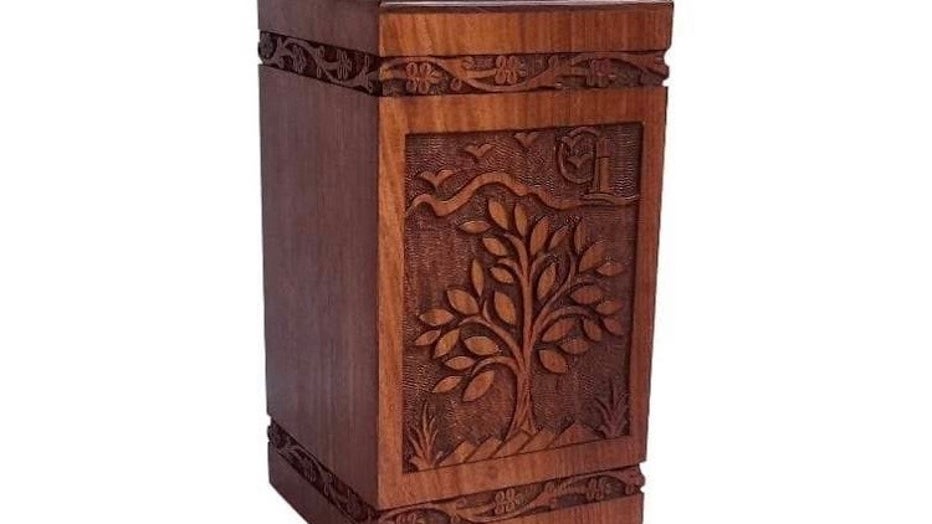 Box made of pinewood where Glenda Cota husband's ashes are stored. They were stolen in Chandler, Arizona. The box is labeled with the name Jason Derek Affolter.

Cota is hoping the thieves didn’t toss the items in the trash, and that there’s still a chance to find them.

"Honestly, I don’t need the nonsensical stuff. If I could just have the ashes back – that’s all I want," she said.

A Suzuki and a Yamaha motorcycle were stolen and so far, police say they have no leads or potential suspects.

Anyone who might have seen or found the ashes, or have information on who might have them, is asked to call the Chandler Police Department at 480-782-4440.