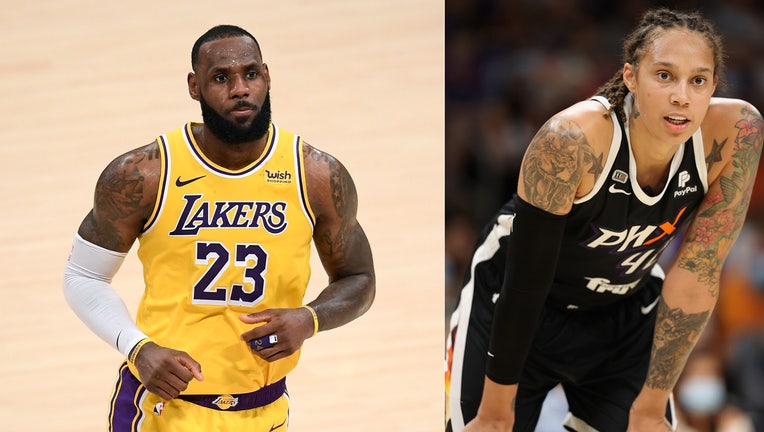 LeBron James joined the mounting support for Brittney Griner on Sunday as the WNBA star remained in custody in Russia after her arrest in February.

James called on the Biden administration to bring Griner home "swiftly and safely" and pointed his followers to a QR code for them to learn more about the Phoenix Mercury center’s detention overseas.

"For over 100 days, BG has faced inhumane conditions in a Russian prison and has been denied communications with her family and loved ones," the picture following James’ tweet read. "As a decorated Olympian and member of an elite global sport community, BG’s detention must be resolved out of respect for the sanctity of all sport and for all Americans traveling internationally. It is imperative that the U.S. Government immediately address this human rights issue and do whatever is necessary to return Brittney home."

James called on athletes to stand together and raise awareness about Griner’s situation.

"We need to come together and help do whatever we possibly can to bring BG home quickly and safely!!" the Los Angeles Lakers star tweeted. "Our voice as athletes is stronger together."

Griner has been held in Russia since February, after Russian authorities said they found vape cartridges containing hashish oil in her luggage. In early May, the U.S. government determined that Griner was being "wrongfully detained" by the Russian government.

In mid-May, Griner’s pre-trial detention was extended one month, according to her lawyer. Griner’s lawyer believes that the short extension signifies that the case will go to trial shortly.

Griner is a two-time Olympic gold medalist and won the 2014 WNBA championship with the Mercury.