Court documents have revealed some extreme details surrounding accusations of sexual harassment against a state politician who became a face of the #MeToo movement in 2017. FOX 10's Matt Rodewald reports.

PHOENIX - State Sen. Michelle Ugenti-Rita became the face of the #MeToo movement at the Arizona State Capitol, after she revealed that she was the target of sexual harassment by her male colleagues throughout her four terms.

In a post made in October 2017 on her Facebook page, Ugenti-Rita said she experienced "unwanted sexual advances and lewd and suggestive comments regarding my body and appearance from male colleagues" almost immediately upon her arrival to the State Capitol.

Accusations leveled by Ugenti-Rita became one of a number of sexual harassment accusations that ended with the expulsion of State Rep. Don Shooter from the legislature. According to the Associated Press, Shooter is the first state lawmaker to be expelled since the emergence of the #MeToo movement.

Now, in a first look of the deposition of Ugenti-Rita by Shooter's defense team, accusations made against Shooter have been revealed, including "awkward conversation about her body", a "late night invitation to a hotel room", and "an uncomfortable lunch in which Shooter expressed his love for her".

However, a lawsuit filed against Shooter also contained extreme details of sexual harassment that a lobbyist claimed she endured at the hands of Ugenti-Rita.

In a court deposition filed on behalf of Shooter, the lobbyist claims that Ugenti-Rita and Brian Townsend, a former staffer for Gov. Doug Ducey, sexually harassed her by repeatedly propositioning for a three-way sexual encounter.

Townsend is Ugenti-Rita's husband, and the lobbyist who levelled the accusations was a former staffer of Townsend.

The lobbyist claims Townsend sent her nude photos on more than one occasion. The lobbyist also believes that Ugenti-Rita knew of them. Ugenti-Rita has confirmed that she was the person featured in the nude photos, but claims she didn't know that Townsend sent the photos, and that it was a source of difficulty in their relationship, in the months prior to their marriage.

In the deposition, the lobbyist claims the situation made her uncomfortable because of Ugenti-Rita's unwelcome sexual advances, including one occasion at a conference, in which the lobbyist said Ugenti-Rita invited her to stay the night in her hotel room.

After yet another nude photo text, the lobbyist shot back, saying "I'm not interested, please stop messaging me."

According to the deposition, once knowledge of the photos started circulating at the State Capitol, the lobbyist claims Ugenti-Rita started yelled at her in a bathroom, calling her a liar. Ugenti-Rita did not deny that claim in her statement, which could open the door to possible witness intimidation accusations.

It was after this incident in which Ugenti-Rita publicly accused Shooter of sexual harassment, leading to his expulsion. 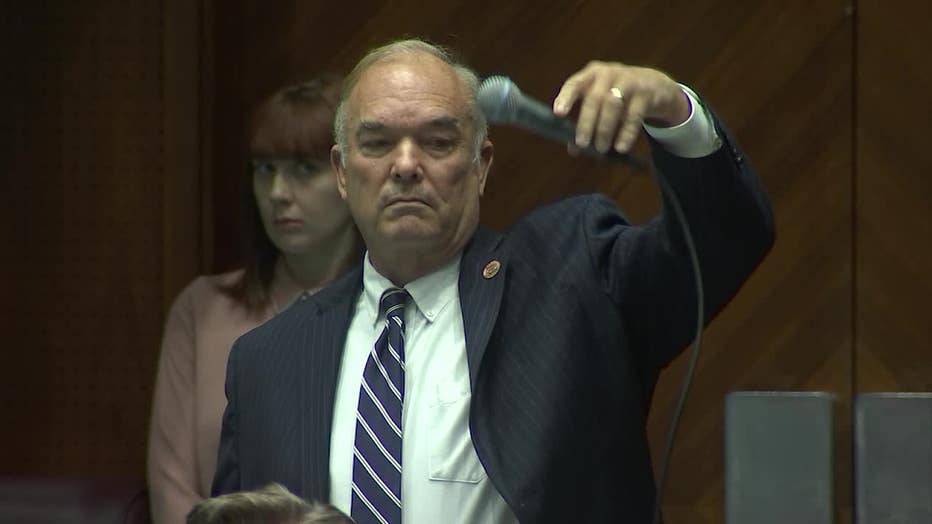 Expelled State Rep. Don Shooter doing a "mic drop" during his expulsion vote in 2018 at the Arizona State Capitol (From Archive / FOX 10 Phoenix)

FOX 10 has reached out to Ugenti-Rita through the Republican Senate Caucus. There was no response as of Wednesday afternoon.

FOX 10 has also contacted attorneys on both sides, with Shooter's team saying they will "continue to pursue justice".