PHOENIX - Officials say a man is dead after a shooting involving two Phoenix Police officers during the early morning hours of Jan. 22.

The incident, according to Phoenix Police Sergeant Ann Justus, happened at around 3:30 a.m. near 23rd Street and Fairmount Avenue, when an officer saw a car that was traveling at a very high rate of speed. The car was later found at the driveway of a home nearby

As the officer approached the car, Sgt. Justus said the officer noticed a man laying down on the back seat of the vehicle. The officer attempted to contact the man, but the man did not respond.

"After about an hour of speaking to the man and trying to get him to come out of the car with no response, some of our officers moved forward and broke a window on that vehicle with the intention of deploying less-lethal rounds inside the vehicle to gain compliance," said Sgt. Justus. "At that point, however, right after the officers broke the window, the man reached for and grabbed the firearm. That's when both less-lethal and lethal rounds were fired by the police department. The man was struck, he was pronounced deceased on-scene by the Phoenix Fire Department." 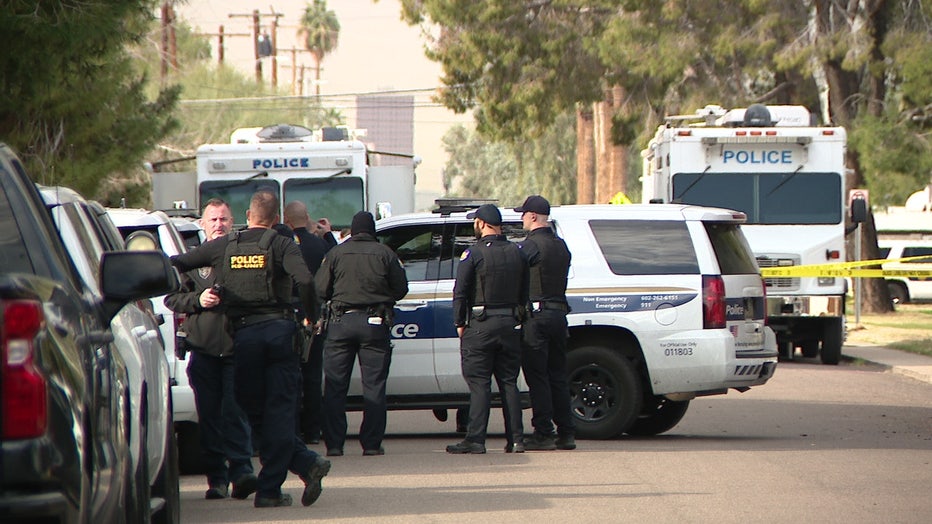 ‘We were all shocked’

Mark Bojorquez is a neighbor where the deadly shooting happened, and says, "This is a quiet neighborhood, so we were all shocked. It’s a Saturday morning, you know. We weren’t expecting to come out to that. When I opened the door, there was cops everywhere."

The incident has now left neighbors of the seemingly quiet community shaken.

Bojorquez says the cops came knocking on his door around 5 a.m. Saturday morning, asking if he could take in the homeowners and their dog.

"Three people that were living in the house, where the vehicle parked in front of their house, so the police were trying to evacuate them from the scene brought them over to our house just to be safe while they were trying to deal with the suspect," he said. "They were very shaken up yeah. It was a tough deal it was kind of … nobody was expecting it …"