In many cases, a funeral is held for a person who has passed away. On Oct. 5, however, a 'live funeral' was held for a young, healthy woman at a Mesa funeral home. FOX 10's Steve Nielsen explains.

MESA, Ariz. - With life also comes death, and oftentimes, it is common for some sort of a funeral (or a celebration of life) to be held for the person who has passed on.

One celebration of life in Mesa that took place on Oct. 5, however, is getting some attention because the celebration was held for a person who is still alive.

Here's what you should know about living funerals, which some say is an up and coming trend.

According to the website for Bare Funerals & Cremations in Australia, living funerals, which are also known by a number of other names, such as "living wake" and "pre-wake wake," are memorial ceremonies that are held before a person has died.

"It’s a chance for a community of friends and family to come together and tell a loved one the impact they have made on their lives, while they are still here to hear it," a portion of the website reads.

Is living funeral a new thing that people are doing?

Living funerals are something people have done for some time.

In 2006, the BBC reported on a Hungarian theater director, Peter Halasz, who staged his own living funeral by lying in state for an entire week.

"I want to take a look at my friends and listen to the eulogies, and the final farewell," said Halasz, in an interview with the BBC.

Halasz was diagnosed with terminal cancer at the time he held his own funeral. According to his obituary on the New York Times, Halasz died that same year, just a month after the live funeral.

Meanwhile, there is a trend of living funerals in Japan. According to a 2012 book published by Hikaru Suzuki, living funerals in Japan, called "seizenso," has been done by celebrities. The first seizenso in Japan happened in 1992, and media coverage of seizensos in that country contributed to its spread amongst common people there.

What happened at the living funeral in Mesa? 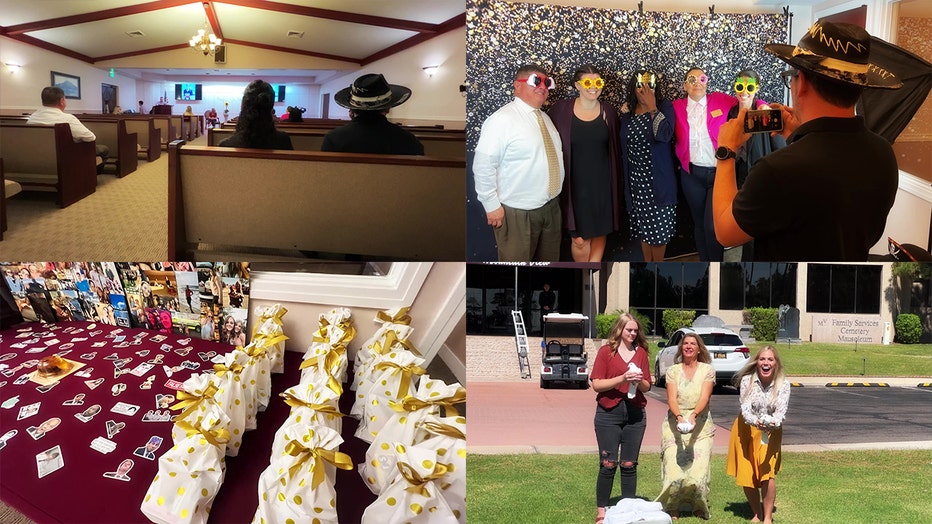 "A little overwhelming but pretty cool to see," said Parker.

Parker's mother essentially surprised her with the living funeral, which allowed her to hear people express how much she means to others.

"A little uncomfortable at first, but once we got in the groove of it and heard everyone’s stories, I realized how important it is to hear it before it’s too late," said Parker.

Compared to a funeral, which can be a somber affair with lots of tears, Parker did hers differently.

"She wanted people to be silly and have fun and wear props, and throw it all out there with her crazy personality," said Elisa Krcilek with Mountain View Cemetery and Funeral Home, which held Parker's live funeral.

Why are people holding live funerals?

For some at least, it appears the point of a living funeral is to be able to witness it.

According to officials with Bare Funerals & Cremations, they often have customers who say they feel there is no point in spending lots of money on a funeral when they won't be there to see it.

"Attending your own wake means you have the chance to listen to and appreciate the stories being told about you. That way, you are present to hear the eulogies and tributes and understand the impact you have made to your friends and family.

Officials with Bare Funerals & Cremations say a living funeral could help a person who has been diagnosed with a terminal illness.

"A terminal diagnosis can leave a person feeling lost and vulnerable. In contrast, a celebration in their [honor] can be a way to help a dying person find renewal as they hear how their life has inspired others," read a portion of their website.

According to the website USFuneralsOnline, the rise of living funeral comes at a time when the funeral industry is moving away from an era of tradition, and beginning to embrace the unconventional.

"Baby boomers and Generation X’s are beginning to make their own funeral plans or help plan the funerals of their parents. As generations, these both have a different approach to the conventional, always being on the forefront of challenging the norms as they have moved through life events," read a portion of the website.

According to a 2016 article published by the Toronto Star, some aspects of a living funeral could be controversial, as such events, while gaining steam, are far from common.

"Not everyone is familiar (or) comfortable with the living funeral, so some relatives may not participate, then be upset by others’ absence at a traditional funeral," said funeral industry expert Alicia King, in the article.

In the article, King also said that some living funeral attendees could get emotional, would could be upsetting not only for other guests, but also people being honored.

"It’s important to have a plan in advance so the attendee can be gently calmed and re-enter the party [or] ceremony," said King, in the article.