MARICOPA COUNTY, Ariz. - A small group of protestors stood outside the Maricopa County Elections Department the weekend following Election Day who were seemingly unhappy with the election results so far.

The group peacefully protested but were angered by what they claim is a fraudulent election in the county, despite no evidence of fraud.

The sheriff says the group had an objective, stayed within the scope and left in a "reasonable amount of time."

Inside the elections department tells a different story as volunteers and employees worked hard to count and certify each vote. 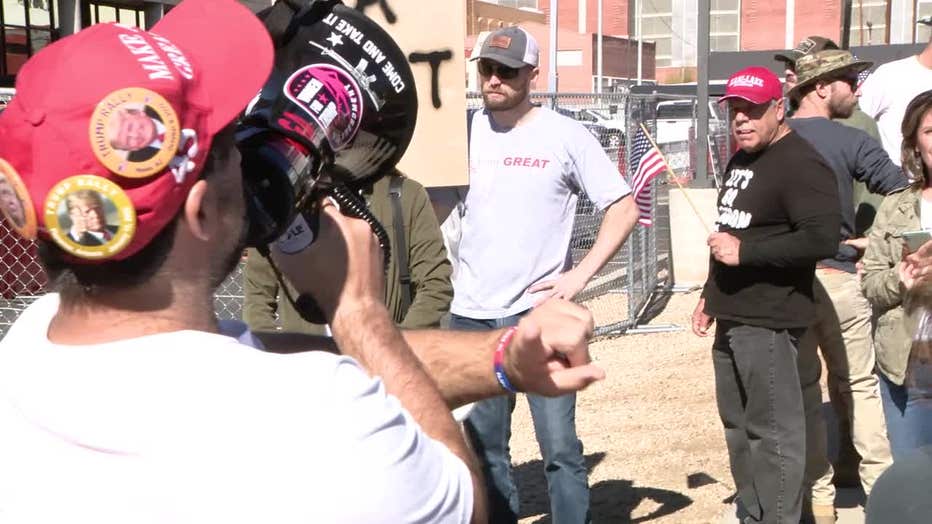 Elections officials, including Maricopa County Board of Supervisors Chairman Bill Gates, were joined by Maricopa County Sheriff Paul Penzone, to discuss the latest tabulation numbers and security surrounding the process.

"Here are people who get overzealous and do some things that give us some cause for concern, otherwise the sheriff wouldn’t be here right now talking to you," Penzone remarked.

Part of the concern, he says, is fueled by social media.

"Yesterday there were some tweets going out from at least one elected official, summoning folks to come out here today and be heard," he said.

Arizona Rep. Wendy Rogers urged supporters to come out to the department.

"It gave me some cause for concern – because you may be well intended. But that doesn’t mean everyone who responds to your calling has the same intentions," Penzone said. "It can empower them into a space where bad things can happen.

Hours later, Rogers sent another tweet, this time telling people to stay back, so the votes could be counted instead.

Penzone says the crowd remained peaceful and obeyed all laws.

Additional law enforcement resources were called over to the building, Penzone says, which came at the cost of other issues in the county not getting the necessary attention.

This happened as workers continue to count thousands more ballots to determine races across Arizona, including the biggest statewide race for governor.

With the ballot drop at 6 p.m. Saturday reflecting more of the early ballots dropped off on Election Day, Gates insists the criticism and protests from some haven’t stopped workers from doing their job.

"This is why these people show up to do this work, because it matters," he said. "This matters more than it ever has before."

Back to the protesters – Penzone said with the help of Phoenix Police, they were able to get some protesters who marched in the street, out of harm's way. Another person had symptoms of heat exhaustion but is OK.

First in, first out

"We're not picking (ballots) from certain parts of town. In fact, we can't do that because we have a vote center model. Let's say we have someone that lives in Gilbert, but they work in Surprise. They go to the vote center in Surprise on their lunch hour," Gates says as an example, showing that residents' votes can be all over the county.

Check out our coverage of the following: