NEAR SCOTTSDALE, Ariz. - A rural Arizona town's battle for water has captured national and global attention.

Here's what you should know about the situation, and how the town got there.

Why did Rio Verde residents lose their water supply?

In short, it is a combination of the long-term drought Arizona is experiencing, along with municipal responsibilities (or lack thereof).

We first reported on the area's looming water problems back in 2021, when residents received a notice from the City of Scottsdale, which states that the city's water utility will be restricting water hauling to those living within the city limits, as a result of the city's Drought Management Plan.

According to the city's plan, water hauling operations are required to stop when Scottsdale entered Stage 1 of the plan, unless the water hauling customer can indisputably prove that the hauled water is being supplied directly to a Scottsdale resident or a Scottsdale business.

"Rio Verde is a separate community governed by Maricopa County, not the city of Scottsdale," read a portion of a fact sheet published by the City of Scottsdale in regards to the Rio Verde water problem. "Scottsdale has warned and advised that it is not responsible for Rio Verde for many years, especially given the requirements of the city’s mandated drought plan."

Scottsdale warned of a possible cutoff for several years and said it gave Rio Verde Foothills residents and Maricopa County plenty of warning that it wouldn’t provide water forever.

In addition, Scottsdale city officials said since the city has a water recycling program, providing water to Rio Verde Foothills residents also means the city cannot recapture most of that water for recycling.

Is Scottsdale the only city enacting water conservation measures?

In light of current drought conditions, a number of cities in the Phoenix area have enacted water conservation measures.

Some cities, like Mesa, Tempe and Glendale, have set up goals on water use reductions, while other cities, such as Phoenix and Chandler, say they are in a stage of their respective drought management plans that focuses on education.

How much water does Scottsdale provide to the Rio Verde area?

In the past, water haulers would buy water from Scottsdale fill stations, and then deliver it for a fee to Rio Verde residents.

According to a memo published by Scottsdale city officials in December 2022, the city provides approximately 117 acre-feet of water to the Rio Verde Foothills area annually.

117 acre-feet roughly converts to over 38 million gallons of water.

Meanwhile, data from the USGS shows the average Arizonan uses 146 gallons of water per day. Based on that, 38 million gallons of water is equal to the one-year water need of about 713 Arizonans.

How many people are affected by Scottsdale's decision?

In our previous reports, we noted that many of the 2,000 properties in the area have their own well water, but over 500 homes rely on Scottsdale water.

"It’s not just numbers. It’s families," said John Hornewer, in an interview in December 2022. "These are people, so honestly, I never thought it would really come to this."

What are residents saying about the shutoff?

In November 2021, residents expressed their shock and fears over the then-impending water shutoff.

"If we can't figure this, we lose all equity in the home and then some," said one resident. "We don't have anything left. We have no options."

"Residents are scared, frustrated, and they’re angry that we're even in the situation," said Karen Nabity. "The rest of the nation better be paying attention, because a lot of people are right behind us,"

Are residents doing anything to get new sources of water?

There was an effort to start a new Domestic Water Improvement District (DWID) for the area.

DWIDs, according to information provided by Coconino County, is a quasi-municipal corporation of the State of Arizona that is prescribed by state law, and is governed by a "locally elected board of directors composed of property owners within the community."

According to the website of a DWID that serves an area near Payson, DWIDs has a number of powers, including the authority to finance and serve drinking water within its boundaries.

"Rates can be set and adjusted as appropriate without gaining approval from the Arizona Corporation Commission," read a portion of the website.

Not everyone, however, was onboard with plans for the DWID. Some expressed concerns over whether the DWID would represent the entire community. Others, meanwhile, expressed worries that a DWID would give too much power to some residents over others, as well as the unknown cost and difficulty of running such an entity, and government overreach.

The Maricopa County Board of Supervisors voted against the district in August 2022.

The war over water in the Rio Verde Foothills community came to a head on Jan. 29 as a room packed full of residents met with officials for answers about why they're being left high and dry. It comes after Scottsdale cut off the water supply to its neighboring community.

State Senator John Kavanagh remarked, "You are now in the fight of your lives to defend your homes and way of life."

He told residents more about his proposed bill to solve the situation that would allow the community to receive outside water using the city of Scottsdale’s pipe system until they could build their own via EPCOR.

It would also have protections that would stop the agreement if it would jeopardize the water supply of Scottsdale residents. However, even if it did pass, he admits it would still take around four to six weeks minimum to go into law.

Residents in a rural part of northern Maricopa County have been dealing with a water crisis, after the City of Scottsdale decided to no longer allow the city's water to be hauled to residents in the Rio Verde Foothills area. As a utility company waits for approval on their plan to provide residents there with water, people in the area are running out of water, as well as options. FOX 10's Nicole Garcia reports.

An Arizona judge says she won’t compel Scottsdale to resume an arrangement that allowed residents of a neighboring community to get their water from a city standpipe, saying the flap isn’t the court’s concern.

Maricopa County Judge Joan Sinclair wrote in an order released this week that people living in the Rio Verde Foothills have not showed the city caused them irreparable harm and said community residents can obtain their water elsewhere.

Sinclair’s order rejecting the residents’ request for an injunction to make Scottsdale temporarily resume the water arrangement was a victory for the city.

Meanwhile, State Rep. David Cook has sent a letter to the Arizona Corporation Commission, urging them to expedite the approval process for EPCOR.

As for security water in the coming months, there is talk of the City of Scottsdale partnering with EPCOR.

"We would go about determining the most cost-effective way to obtain the water, and build the facilities to provide the water," said Thomas Loquvam, EPCOR's Vice President of Legal and Public Policy. "We could bring new water into Scottsdale and use their infrastructure, but Scottsdale is facing its own challenges. We would only do that if Scottsdale was a ready, willing, able partner."

"Scottsdale profits," said Rio Verde Foothills resident Cody Reim. "It's EPCOR's water that’s coming through. We would just be using their infrastructure and paying them."

As noted below, EPCOR is proposing a $20 per 1,000 gallons rate for its water, marking a considerable increase from what Rio Verde Foothills residents were paying to the City of Scottsdale.

Even if EPCOR's plans are approved in an expedited manner, it would still take two to three years for the infrastructure to be completed.

In a notice published on the company's website, officials with EPCOR say they have filed an application with the Arizona Corporation Commission for approval to provide the community with standpipe water service.

"EPCOR proposes that the rates to be charged for the Foothills Standpipe be established at $20.00 per 1,000 gallons," read a portion of the notice.

For comparison, Scottsdale has a tiered water rate system, with a single family residential home being charged $1.65 per 1,000 gallons, for the first 5,000 gallons (excluding base fees and other surcharges). After that, the rate increases depending on water use. Residents in the Rio Verde Foothills were paying Scottsdale $7 for every 1,000 gallons.

Dozens of Rio Verde residents voiced their opinions during a public comment session in front of the Arizona Corporation Commission. Some of those attending say they want a utility company to step in.

"I would support EPCOR 100% if they do not drill into our aquifer, if everybody had access to water, and if the price is affordable," said one person.

"They are in the business of water," said Christy Blackman. "They know what they're doing, they know where the water is at, they're capable of doing this. We just need the [Arizona Corporation Commission] to get it moving."

Scottsdale's City Council is scheduled to meet on Jan. 24 to discuss a petition requesting the city enter into an agreement with EPCOR to treat and deliver water to residents at Rio Verde.

Homeowners living in the unincorporated Maricopa County community sued Scottsdale, demanding that access to the city’s water supply be restored.

"The city of Scottsdale has placed plaintiffs and their families under an unconscionable amount of stress and anxiety by discontinuing their domestic water supply," says the lawsuit, noting "the lack of fresh potable water for families to be able to bathe themselves or running water to flush their toilets is a well-known basic necessity."

The courts ultimately sided with Scottsdale in the lawsuit. 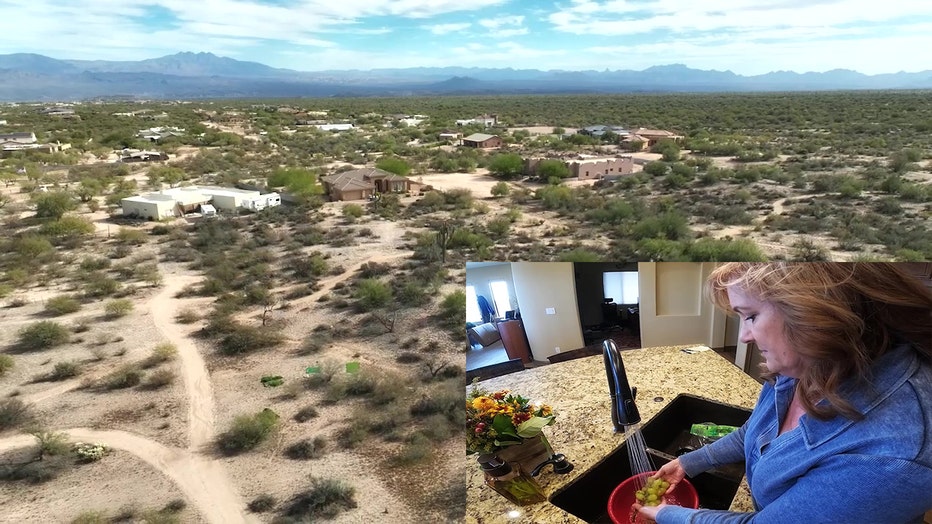