Just days after returning to work as Maricopa County Attorney following in-patient treatment for anxiety, eating disorder, and alcohol use issues at an out-of-state facility, Allister Adel is talking about what happened, even as she faces calls to step down or be recalled from office. FOX 10's Matt Galka reports.

PHOENIX - Maricopa County Attorney Allister Adel, who returned to work on Sept. 20 after undergoing treatment for anxiety that she said led to an eating disorder and alcohol use, is talking about what happened.

This was not the first time Adel has been in the public spotlight due to health concerns. On the night of the 2020 elections, Adel underwent emergency surgery due to brain bleeding after falling and hitting her head at her home. She returned to her home from the hospital a month later.

In an interview, Adel said while she has had a roller coaster year, she remains fit for office.

"This isn’t like you go away and you get treatment from medical providers and such, and you work with them and they wave a magic wand, and you’re good to go. This is a lifelong commitment, and I’m up for the challenge," said Adel.

She has been receiving treatment for at least 2 weeks before she notified the Maricopa County Board of Supervisors.

On Sept. 10, Adel announced that she is seeking treatment for a number of issues related to mental health and the use of alcohol.

"After a very difficult year for me medically, professionally and personally, I have made the decision to seek treatment for anxiety and to address unhealthy coping behaviors including an eating disorder and alcohol use," Adel said in the statement on Sept. 10.

Adel released new details on Sept. 14 surrounding her health-related issues. According to a statement, Adel said she first sought in-patient services at an in-state facility on Aug. 29.

"One week later, and after several assessments, I moved to different location with the same behavioral health organization and am currently receiving treatment in California," Adel wrote, in the statement. "The statement was publicly released on Friday because of rumors regarding my treatment that I didn’t want to become a distraction for my office or that of county government. Out of respect, members of the Board of Supervisors were notified prior to my public statement."

It has since been revealed by Maricopa County Sheriff Paul Penzone that on Sept. 9, he was advised by a confidential source that Adel was struggling with "some dependency issues," and that she was staying in a recovery facility.

"It was my responsibility to confirm the information and determine if or how it would affect the role and responsibilities our offices share. I spoke with a staff member from her office shortly after learning of the circumstances and the information was confirmed," Sheriff Penzone wrote, in a statement.

Sheriff Penzone said while he expressed both support and concern regarding Adel's well-being, he also "questioned the appropriateness of continued influence over the office while in recovery."

"It was my recommendation that she consider a leave of absence and a limited public statement regarding her leave. I was advised she felt confident in her ability to manage the office remotely. I again expressed concern and my opinion that a leave should be considered to fully focus on her recovery," Sheriff Penzone wrote.

Eventually, Sheriff Penzone said she told Adel's staff that he felt that honesty and transparency were necessary, and that she needed to advise Maricopa County Board of Supervisors Chairman Jack Sellers regarding her circumstances.

"Certainly I could look back and overanalyze the decision I made. It was always something I was going to tell the board and the public, it was always my plan, but I was looking for the right time to do it in my recovery," said Adel.

In the days following Adel's announcement that she was receiving treatment out-of-state, calls were made for her to resign from office.

On Sept. 15, the Maricopa County Democratic Party released a statement that called on Adel to resign immediately.

"While MCDP is empathetic to County Attorney Adel’s health concerns and wishes her a speedy recovery, Adel cannot lead the Maricopa County Attorney’s Office in a rehabilitation center," read a portion of the statement. "Recovery is a full-time job that requires complete dedication and commitment. She cannot focus on her recovery while simultaneously head an agency of over 1,000 employees."

The announcement came just days after a group that calls itself Mass Liberation AZ made a similar call. The group also called for Adel to be recalled from office if she refused to resign.

"Adel’s confession that her personal, professional, and medical difficulties have led her to unhealthy coping behaviors is a slap in the face to the thousands of people who have been criminalized, prosecuted, and caged by her office for substance use," read a portion of the statement from Mass Liberation AZ. "It is in Allister Adel’s best interest to resign from her position and stop holding this office hostage. Adel doesn’t get to hide out during the calls for accountability. The community will not tolerate it. She can either resign or we will recall her."

Mass Liberation AZ has put up billboard at multiple highway sports. The billboards read "Resign or be recalled."

"Sobriety is important, and taking care of yourself is important, but we were telling Allister Adel she needs to go before all of this," said Bruce Franks Jr. with Mass Liberation AZ.

Adel has rejected all calls for her to resign.

"Unfortunately, politics does funny things to people, and I’m not going anywhere. This has not made me waver. The criticism, the calls for me to resign. I’m not resigning," said Adel.

Adel was appointed as Maricopa County Attorney in October 2019 to fill a vacancy created by the appointment of Bill Montgomery to the Arizona Supreme Court. She was elected to the office in her own right in 2020.

Adel has faced intense scrutiny after her office brought serious gang charges against protesters who took part in a October 17, 2020 protest against police brutality in Downtown Phoenix.

In February 2021, Adel's office filed to dismiss the case against the 15 people who were arrested. By June, a motion was filed to drop all charges with prejudice, meaning they can't be filed once again.

The American Civil Liberties Union of Arizona and others have called the charges an abusive political prosecution intended to silence dissent and scare protesters. The prosecutor, April Sponsel, has filed a $10 million claim against the county. 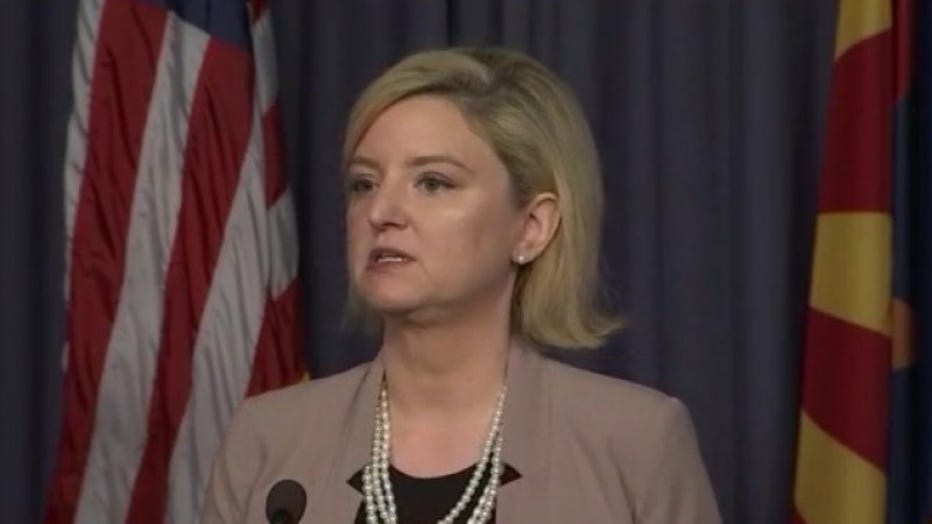